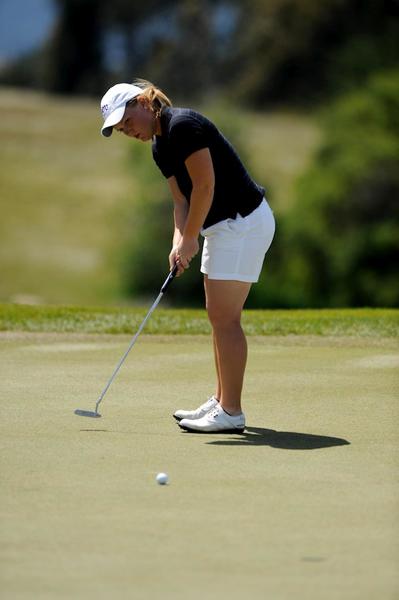 After solid performances in the fall, the TCU women’s golf team is ready to return to the green for the 2011 spring schedule.

The Horned Frogs ended the season on a high note. The program won its 12th tournament title under head coach Angie Ravaioli-Larkin at The Alamo Invitational in San Antonio. It was TCU’s first recorded tournament win since 2007.

“It was a big breakthrough,” Ravaioli-Larkin said. “They believe in themselves a little bit deeper, and their confidence is a little bit stronger.”

During the offseason, the team experienced challenging and intense workouts in the weight room, Ravaioli-Larkin said.

“The workouts are meant to build strength not only physically but to build their mental toughness,” she said.

Ravaioli-Larkin said all team members had to see their golf instructors over break. Individually, they had to work through some kinks in their swings and other technical elements that needed to be fixed.

Ravaioli-Larkin has been the team’s head coach for 17 seasons. She said the greatest strength of the team was the respect the golfers have for one another, which provides great synergy.

She said they do things outside of practice together and that they’re all great friends, which doesn’t happen every year.

“They have great energy when they are practicing, they all love coming out there and they all get along very well,” Ravaioli-Larkin said.

She said the veterans are expected to display leadership.

Senior Melissa Loh and junior Rachel Raastad are expected to have breakthrough seasons, Ravaioli-Larkin said. Last season, both of them contributed to TCU’s tournament success.

Loh competed in 11 tournaments during her junior season and posted a 76.42 strokes average. She also earned four top-25 finishes.

Raastad also competed in 11 tournaments as a sophomore in which she posted a 75.06 strokes average. She also recorded six top-25 showings, including five top-10 finishes.

Junior Brooke Beeler recorded her first collegiate tournament championship in the fall, leading the Horned Frogs to win The Alamo Invitational Tournament. Beeler’s 54-hole score of a 4-under-par 212 was a career best.

The Horned Frogs will tee off the second weekend in February for the Purdue Invitational in San Juan, Puerto Rico.