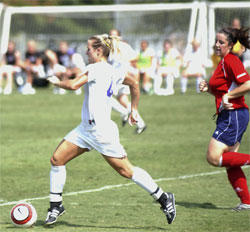 Sunday afternoon brought forth another victory for the soccer team, with a 2-1 win over Houston, earning a split in the weekend matches at Garvey-Rosenthal Soccer Stadium.Head coach Dan Abdalla said he was pleased with the team’s ability to bounce back from the 2-0 loss suffered Friday night to the Notre Dame Fighting Irish .

The game had more of an offensive presence from TCU as it took 16 shots compared to the four-shot effort from Friday’s game. The two goals for TCU on Sunday happened within the first 20 minutes of play from junior midfielder Lauren Pope and freshman forward Chelsea White.

By adding an assist to go along with her goal, Pope helped to set the tone for the match, Abdalla said.

Pope’s goal was her team-leading fourth goal of the season, which was scored in the 11th minute on a shot taken from about 12 yards out.

“The defense gave me the space, and I was able to sneak it in,” Pope said. “Whenever the opportunity for a goal presents itself, we’ll be able to hopefully finish.”

Even after being shutout Friday, the Horned Frogs were not stunted by the quick play of Houston and its standout midfielder Sophia Mundy, Abdalla said.

“We did a good job of keeping her in check and not giving too much respect,” Abdalla said.

The game-time strategy of Sunday’s match took a different approach from the Friday contest with Notre Dame.

“We were able to play a more straight-up offense,” Abdalla said, “but we needed more presence winning the middle of the field.”

Though Friday’s matchup did not play out for a TCU victory, faltering to the No. 1 ranked Fighting Irish tested the caliber of the TCU defense.

Abdalla said the team used a defensive formation with speed up front with freshman forward Lizzy Karoly and five midfielders.

“We were trying to slow the pace of the game down,” Abdalla said.

The two Notre Dame goals came in the second half, both on crosses from the right side made by Michele Weissenhofer. The first goal came from a chip across the penalty box that found the head of Irish midfielder Jill Krivacek and snuck in behind Horned Frog senior goalkeeper Katy Buchanan.

“It was very difficult with that many people in the six (yard box),” Buchanan said, “They won the ball and played stronger in the air.”

The second goal came from a free kick just outside of the 18-yard box at the 71-minute mark. A Weissenhofer cross found Brittany Bock along the back side of the TCU defensive wall.

“We were caught ball-watching along with a bit of fatigue during the second goal,” Abdalla said.

After rebounding from the shutout Friday, the team brought its season record to 3-3.

The weekend games were played before more than 3,000 fans, and the next match will take place Friday at Garvey-Rosenthal stadium against Sam Houston State.