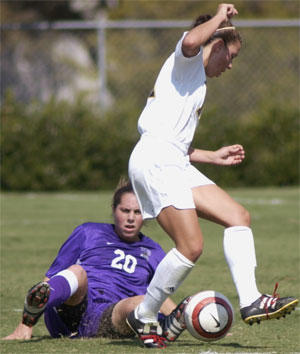 Two final home games provided the TCU women’s soccer team a chance to capture its first win in Mountain West Conference play, but the team fell short on both attempts.Despite holding San Diego State and Nevada-Las Vegas scoreless for a half in each game, the Frogs dropped Friday’s game against the Rebels 1-0 and Sunday’s game against the Aztecs 3-0.

“We played three real good halves and one bad half,” head coach Dan Abdalla said. “We didn’t put our games together.”

Abdalla said the Frogs played quality defensive teams the past four games and that has caused the team to be tentative offensively.

The score was tied at halftime with San Diego State having a 9-8 advantage in shots, but with the Frogs holding a 2-1 edge in corner kicks.

The Aztecs came out strong in the second half.

With just over 43 minutes left in the game, defender Ashley Young scored the game-winning goal on a corner kick. San Diego State would tack on two more goals by the end of the game, one on an unassisted breakaway.

“We fought, but we just couldn’t score,” senior midfielder Moran Lavi said. “We had mistakes that led to a goal.”

UNLV scored the sole goal of the game just over eight minutes in on a corner kick by defender Lisa Sternberg.

TCU had only one shot on goal compared to UNLV’s ten, and the Frogs had six more fouls in the match than the Rebels.

“The first half was disappointing, but we came out in the second half and fought hard,” senior midfielder Bara Gunnarsdottir said.

Gunnarsdottir said even though the Frogs lost the game, they put forth a strong effort to try to get back in the game time after time.

The Frogs will finish the season on the road, playing three straight away games, the first against Air Force on Friday at 6 p.m. and the final two against Wyoming and New Mexico, respectively.

At the end of the season, TCU will compete in the conference tournament which is to be held in Las Vegas.

“We want to have the effort there for the next three games so when we go into the conference tournament, at least we’ve got that going for us,” Abdalla said.