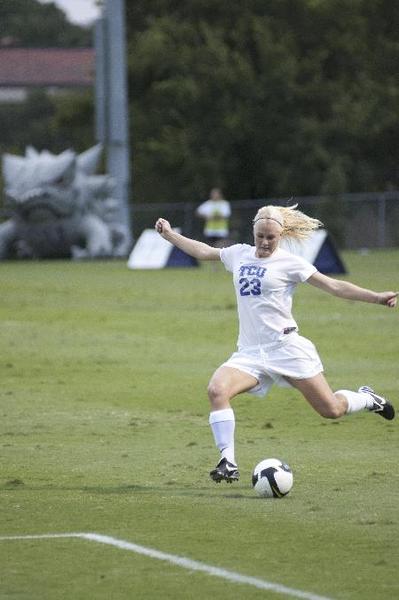 The Horned Frogs’ 2-1 win in Houston Sunday against Rice will be fresh in their minds as they travel to Colorado Springs Friday to take on the Colorado College Tigers.

The Tigers are ranked twenty-third nationally by SoccerAmerica.com after defeating Drake University and Washington State University, but thus far their record is 2-2. With a record of 4-1, the Horned Frogs have garnered more wins statistically, but the history between the two teams has yielded an 8-1 record in favor of the Tigers.

The last meeting of the teams took place in 2007 at Garvey-Rosenthal Stadium and ended in a 1-0 victory for Colorado.

Colorado College players to watch are forwards Kelly LaVoie and Tiffany Brown. Brown and LaVoie are the two best goal scorers for the Tigers, and make up a dangerous combination that will test the Horned Frogs’ defense and junior goalkeeper Kelsey Walters.

Brown could be a dominating force on the field, according to CollegeSoccer360.com, who named Brown one of its Primetime Performers of the Week for the week of Aug. 24- Sept. 1. Another Tiger to beware of is sophomore goalkeeper Caitlin Hulyo, who recorded seven saves in the Tigers Sept. 4 loss to the University of Portland.

However, the Tigers will have a fight on their hands with the Horned Frogs’ all-time leader in goals scored, senior forward Lizzy Karoly and sophomore forward Jordan Calhoun, who ratcheted her career goals up to 25 in Sunday’s win against Rice.

Walters has racked up an impressive 17 saves for the Horned Frogs so far this season and is expected to be solid between the posts Friday.

The Horned Frogs have also tallied 102 shot attempts this year, in comparison to the Tigers’ 31.