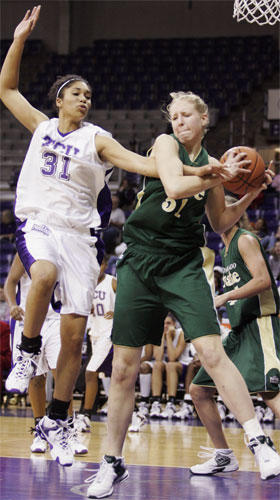 The TCU women’s basketball team dominated the court Wednesday night when it defeated Colorado State 83-57.The Lady Frogs (15-9, 9-4 MWC) shot 62 percent in the first half, making 7 of 11 from 3-point range. Sophomore guard Adrianne Ross led the team in scoring for the first half with 19 points, 9 of which came from behind the arc. Ross said the team was doing a good job of finding the open shot and executing the ball.

Head coach Jeff Mittie said that even though turnovers hurt the team at the beginning of the game, he felt the first half was the most complete half TCU has had all season.

“We were pretty consistent,” Mittie said. “Offensively we shared the ball … and when we did that tonight, we were excellent.”

The Lady Frogs outscored the Rams (8-16, 2-11 MWC) 46-22 in the first half; the Rams only shot 32 percent from the field. Mittie said holding the Rams to such low-scoring offense was a result of good defense.

“We wanted to get very physical in there,” he said. “We played better team defense, and the press we did also helped.”

The Lady Frogs only outscored the Rams 37-35 in the second half, but still managed to take the win by a large margin, thanks to their first-half play. Junior guard Natasha Lacy said the team was able to do so well because they were able to find the open player for the shot against the Rams’ defense.

“We had six people hit threes with the zone,” Lacy said. “You know you’re going to get those open shots.”

Mittie also said the team’s operation against the zone defense was a large part of its victory and this is one reason he knows the team has come a long way this season.

“We got behind the zone and did a good job of finding people that were open,” Mittie said. “That’s when, as a coach, you feel they’ve grown up some, when they can take what you’ve shown them and apply it to the game.”

The Lady Frogs take to the court again when they play at Brigham Young on Feb. 25.