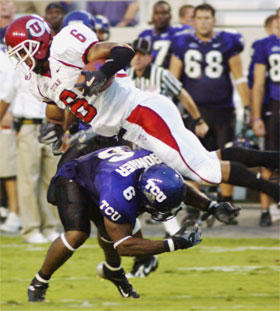 When it comes to Saturday’s game against the University of New Mexico, everyone in the TCU football program can agree on one thing: Win or lose, the Lobos are going to leave a mark.”They come to get into a bar fight,” head coach Gary Patterson said. “I think they’re one of the most physical teams in the Mountain West Conference. It’ll be the hardest hitting game we play in all year.”

“They’re very quick on defense,” Kesler said. “Their offensive line is very big; they call themselves the hitmen.”

UNM comes into this weekend 3-1, with a 1-0 record in conference. TCU is also 3-1, but is 2-0 in conference play, which gives the Frogs sole possession of first place. Patterson said that even though the Lobos have won more than half their games the past three years, this year’s roster may be the most potent.

“This might be, overall, the best New Mexico team (head coach) Rocky Long has had in the last three or four years,” Patterson said.

The Horned Frogs’ defense, which allowed 50 points, 614 yards and five passing touchdowns last week against Brigham Young, will be facing a Lobo offense this weekend that sports a passing game every bit as potent as the Cougars’.

“(Baskett) just does a tremendous job of going up and getting the ball,” Patterson said.

Despite the Lobos’ efficient passing game, UNM senior tailback DonTrell Moore is rushing for 103.5 yards per game, good enough for first in the conference and 22nd in the nation. Last week, Moore rushed for 161 yards against Texas-El Paso to make him the 65th player in NCAA Division I-A history to reach 4,000 career rushing yards.

Sophomore linebacker David Hawthorne said a tailback like Moore is nothing new to the Frogs this season.

“We’ll probably do the same thing we did against Oklahoma and make it a focus point,” Hawthorne said. “We’re just going to keep doing things traditionally.”

Perhaps the Lobos’ most important statistic however, is that they have only turned the ball over twice so far this year – both on interceptions.

Patterson said forcing turnovers from UNM’s stingy offense will be a key point for the Frogs’ defense.

“You have to put the other team in a position where they will turn it over, like third and long,” Patterson said. “That was the key the other night in the (Lobos loss to) UTEP, the big interception that led to a touchdown.”

TCU senior quarterback Tye Gunn, who suffered a right shoulder injury in last week’s game against BYU, will not start this Saturday. Reserve Jeff Ballard will take his place.

Michael DePriest said Gunn’s absence hasn’t affected the team this week in practice. “I say (practice) is going pretty much the same,” DePriest said. “We haven’t really missed a beat at all,”

Patterson, who was the defensive coordinator at UNM during the 1996 and 1997 seasons, said his past with the Lobos will have no factor on this weekend’s game.

“That was a long time ago,” Patterson said. “In my opinion, the score is the only stat that matters. On any given day, you have to win two out of three, with those three being offense, defense and special teams.