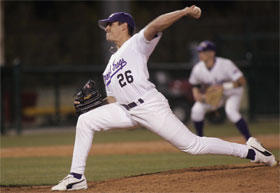 The Horned Frog baseball players are looking to put a home-opening loss to Texas State University behind them this weekend when they travel to Edinburgh for the Al Ogletree Classic. The Frogs (2-2) will face off against nationally-ranked Arkansas (3-0), Stephen F. Austin (2-5) and Texas-Pan American (3-5).

Head coach Jim Schlossnagle said the No. 17 Razorbacks are a tough challenge for the Frogs in the first game of the tournament.

“It’s always a challenge to go on the road and be successful, especially versus a team like Arkansas who is picked to win the SEC West,” Schlossnagle said.

The Frogs already showed the ability to beat a ranked team away from Lupton Stadium when they defeated No. 12 Tulane in the Houston College Classic earlier this season.

Sophomore pitcher Jake Arrieta said it means a lot for TCU to beat a ranked team.

“It’s always a great accomplishment to beat a ranked opponent, especially an opponent that is ahead of us,” Arrieta said.

Arrieta said TCU has to cut down on the walks and errors it is allowing in games, and pitchers also need to throw more strikes.

TCU will have to find an answer to the cold bats it encountered Tuesday, when it only recorded one run on three hits.

“They have one of the best pitchers in the country throwing Friday,” Arrieta said.

The Razorbacks’ likely starter will be standout lefty Nick Schmidt, just named SEC pitcher of the week Tuesday. Schmidt’s only start of the season came Saturday, a six-inning performance in which he allowed no runs on zero hits.

Beating a team like Arkansas could give TCU the opportunity to host a regional later this year, but Schlossnagle said he is not thinking about that just yet.

“Certainly, to host a regional, you need quality wins, of which we have two good ones right now,” Schlossnagle said. “But regionals and hosting regionals is the farthest thing from my mind right now. We need to continue to improve as a team.”

The Frogs will begin play at 2 p.m. today; the game against Texas-Pan American is scheduled for 5 p.m Saturday; and TCU will meet Stephen F. Austin in the last game at 10 a.m. Sunday.