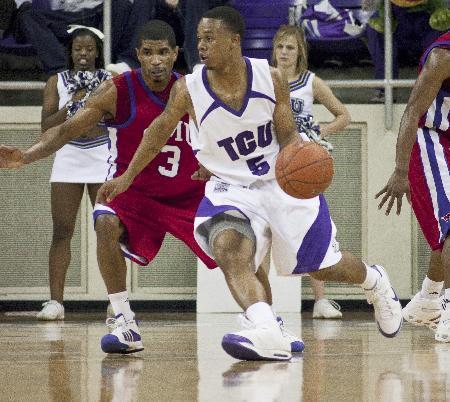 The top-scoring University of Wyoming Cowboys, the latest Mountain West Conference opponent to face the Horned Frogs, ride into Fort Worth today for a shootout in Daniel-Meyer Coliseum.

The Cowboys are led by MWC points leader Brandon Ewing, a senior guard who averages 18.6 points per game this season. Ewing also leads the conference in assists per game, handing out an average of 5.4.

“Brandon Ewing is one of the leading scorers in the conference year after year,” junior guard Keion Mitchem said. “We’ve got to watch out for him.”


What: TCU vs. Wyoming
When: 7 p.m. today
Where: Daniel-Meyer Coliseum

The Cowboys also have the conference’s leading scorer behind the arc in senior guard Sean Ogirri, who has hit 59 three-pointers this season.

TCU, however, leads the conference in three-point defense, only allowing teams to connect on 30.4 percent of three-point attempts.

The Cowboys come into the matchup with a conference record of 1-2, sitting third to last ahead of the Air Force Academy and Colorado State University.

The Horned Frogs want to control Wyoming with their defense, focusing specifically on the team’s perimeter players, Christian said.

“They are one of the best offensive teams in the league, averaging more than 80 points a game,” Christian said. “They are going to try to push the pace of the game and their perimeter is so good and so talented. We have to control them as best we can.”

Defensively, the Cowboys typically match up man-to-man while occasionally mixing in a zone look, Christian said.

“They’re always great defenders and athletic, always with their guards on the wings,” said senior forward Kevin Langford. “You just have to take care of the ball against them.”

The Horned Frogs believe if they play their game they can come away with a victory, Christian said.

“We need to do the things that we do well,” he said.