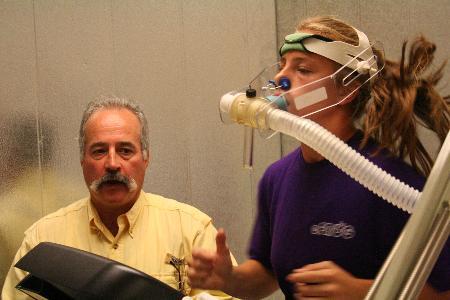 Passing through the doorway of room 258 in the Rickel Building was more like stepping into a Gatorade commercial than a classroom.

Members of the women’s soccer team gathered around teammate Kaylie Garcia, a red-shirt freshman, as she jogged on a treadmill in late September with a clear hose running from her mouth and a U-shaped clip closing off her nostrils.

The girls shouted encouragement over Mix 102.9 blasting out of a boom box to Garcia’s right as she battled through increasing inclines until she couldn’t go any longer.

She jumped off the moving treadmill to its edges with the assistance of her spotters and leaned weakly on the handrails, bent over and gasping for air once the hose was removed.

Upton and the team have paired science and sports to optimize the team’s training programs and gain a better understanding as to why they train the way they do.

For 23 years, Upton worked for his consulting firm, the David Upton Company. The company performed a number of fitness-related tasks, Upton said, such as personally training celebrities and athletes and designing and building fitness centers internationally.

In 1996, it gave Upton the opportunity to work with the Dallas Burn, now FC Dallas and the Texas Rangers. He was asked to serve as strength and conditioning coach for the Saudi Arabian World Cup team, but turned down the opportunity because it would have required him to live there for four years.

Upton’s training philosophy didn’t come from hand-me-down methods because he never played soccer, he said. He was a football player in high school and college. Upon being hired by the Burn, Upton watched hours of videotape and analyzed what it took to be successful at each individual position. From there, he looked at the physiological aspects associated with those skills and developed a training program to enhance those aspects, he said.

The World Cup players that would come in to play for the Burn had never seen anything like what Upton was doing, he said.

“These players thought what I was doing was somewhat insane until they started seeing the benefits of it,” Upton said.

Upton, currently in his third year as a full-time tenure track member of the faculty, first became involved with the team in the spring of 2007 when he had three soccer players in one class and a fourth in another. The players asked Upton if he would be interested in working with head coach Dan Abdalla to develop a program for the team, knowing of his past work.

Upton offered his services at an opportune time because the team had just lost a talented strength and conditioning coach in Joe Walker, Abdalla said. He’s been working with the team ever since.

As a tenure track professor, a research project is required of him. His work with the team will meet that requirement.

As part of the program, the team goes through rounds of testing eight to 12 times a year, Upton said. The most recent round took place the week of Sept. 29, just before the start of conference play.

The testing consists of traditional athletic tests such as the 40-yard dash, mile run, vertical jump and one repetition max outs on bench press and squats. The players also have their height, weight and body composition taken. The body composition test gives a measurement of the players’ body fat percentage.

Upton has incorporated a more scientific approach to the testing by adding a VO2 Max test and wingate test to the team’s regimen.

“It was kind of scary at first because it was brand new to all of us, but now that we’ve gotten used to it, I think it’s pretty fun having to go through the tests every once in a while,” junior Michelle Nguyen said.

In the VO2 max, players run on a treadmill with their nose clipped shut so they are only allowed to breathe through their mouth. Players breathe through a clear hose connected to a computer, which helps determine the volume of oxygen consumed at a maximum workload and the maximum rate at which the body can extract oxygen and use it to produce energy.

Players are told to run until they can’t take another step, Upton said. A higher VO2 max indicates the player is more capable of producing energy in the presence of oxygen, or aerobically.

“Every time it kills you, but it’s a good step to see how far you can push yourself,” sophomore Jackie Torda said.

The wingate test requires the player to pedal on a stationary bike at maximum effort through “30 seconds of hell,” as players described it. The player releases a stack of weights during the test to increase resistance as they pedal. It gives Upton their anaerobic power, energy production done without oxygen.

Upton explained that marathon runners would produce energy almost exclusively aerobically and would, therefore, have a higher VO2 max. At the opposite end of the spectrum, 100-meter sprinters are typically finished with their race before they can use oxygen to produce energy, so they do it anaerobically, he said. Upton said because of the varying intensities at which soccer players run in games, players produce energy in both ways.

“What we have to do is condition them such that they’re capable of recovering as maximally as possible during those jog periods, so they never get an opportunity to recover while seated or while doing nothing,” Upton said. “So we design our training programs to match the needs that are associated with the demands of the sport.”

Upton also managed to spice up the traditional 40-yard dash by placing electronic timers at the starting line, five yards into the sprint, 15 yards into the sprint and at the finish line. The timers, accurate to one one-thousandth of a second, record times at the given locations to allow Upton to calculate velocity and acceleration between the timers.

With a plethora of information at his fingertips, Upton is able to individualize the players’ training and workouts.

“In all cases, we’re dealing with the demands of the sport of soccer, but we’re individualizing it player-by-player because we have such detailed data on each individual that we can fine-tune programs,” Upton said.

Looking at velocity and acceleration in the 40, Upton said he may notice a player accelerates better 25 yards into the sprint than off the starting line. With that information, he can tailor her workout to improve reaction times from the start.

The team improved by .42 seconds in the 40-yard dash since the previous tests eight weeks before, Upton said. Upton couldn’t release the players’ numbers due to the confidentiality of the research project.

The tests help Upton place the players in groups depending on their abilities. He’ll then start the slower groups first in running exercises, followed by the faster groups with the goal of them all finishing at about the same time. This way, all the players are challenged and motivated to perform at maximum intensity which, in turn, improves everybody, Upton said. He helps with the team’s training every Tuesday.

“He is our hero,” Torda said. “You can tell how hard he works by all the time and effort he puts into our practices.”

And it all seems to be paying dividends.

Through 13 games in 2007, the Horned Frogs held a record of 5-6-2. To start the 2008 campaign, the Frogs have jumped out to a 10-2-1 start and find themselves in the top 30 in both Soccer Buzz Magazine’s national rankings and the NSCAA polls.

Abdalla said he has noticed a significant improvement in the team’s overall athleticism.

“Everybody is getting a step or two quicker, and, with distance, just improving their overall aerobic conditioning as well,” Abdalla said.

The project has allowed for the academic and athletic sides of campus to come together, creating a unique educational opportunity for the players and the students that assist Upton.

“That’s one of the fun things with this whole project is the girls are starting to learn some of the physiology,” Upton said. “Being a teacher, I like to have individuals know what’s going on as we’re doing it. So they’re getting an education outside their respective fields.”

Upton has two graduate students and two undergraduate students assisting him in conducting tests and designing the teams’ workouts, providing hands-on work for the students rather than limiting them to classrooms and laboratories.

It has given the players a better understanding of their training program as well.

“We’d be running to get fit, but I feel like now that we’re running, we’re running with a purpose and we’re getting a lot more out of it,” Nguyen said.

“My belief is if you understand why it’s beneficial to do something, you’re then able to make a more informed choice as to whether you want to do it or not,” Upton said. “And the players are responding really well. They enjoy knowing what’s going on.”