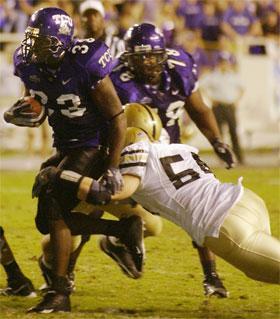 But if TCU beats the second-place Rams on Saturday, the Frogs will clinch a Mountain West Conference title in only their first year as a member – and they’ll do it at home.

“The thing we like best is we have the game here,” Patterson said. “There’s nothing better than trying to close it out at home.”

Colorado State, despite a misleading 5-3 record, has the offensive firepower to compete with a potent TCU offense. The Rams are tied for second in the league in scoring offense with a 30.5 points per game average, behind only TCU, which is averaging 31.9 points per game.

Colorado State’s offense only becomes more dangerous as the game goes on; The Rams have outscored its opponents 111-66 in the fourth quarter this year.

Patterson said both teams will look to take the late advantage.

“We kind of mirror each other,” he said. “We both play well from the middle of the third quarter on. They get stronger and have a good running game and can wear people down.”

Senior cornerback Quincy Butler said the Colorado State offense is the most explosive one the Frogs have faced so far. Ram quarterback Justin Holland is currently fourth in the nation in pass efficiency.

Even though Anderson is 5-foot-11-inches, substantially shorter than some of the other marquee receivers the Frogs have faced this season, Patterson said Anderson plays bigger than his size.

“He’s not small. He’s very physical,” Patterson said. “He’s very stocky and deceptively fast. He’s one of those guys that knows how to go out and make plays.”

TCU is coming off a week where it exploited a weak San Diego State run defense for 291 rushing yards on 58 attempts. Colorado State’s run defense, however, is even worse: 103rd out of 119 Division 1-A teams.

“We’re just going to keep doing what we’ve been doing,” Merrill said. “If everyone keeps scoring, we have a chance to win.”

The game will kickoff at 6 p.m. Saturday at Amon Carter Stadium.