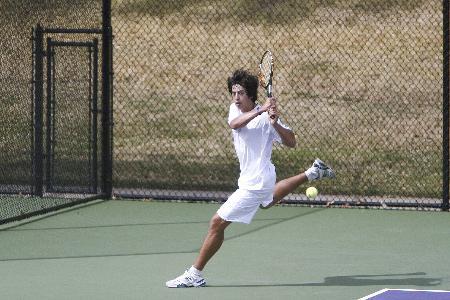 The No. 43-ranked men’s tennis team pulled through with two wins this weekend at the Bayard H. Friedman Tennis Center.

The wins moved the team’s record to 5-7 in the spring and pushed its consecutive-win streak to three.

Head coach Dave Borelli said the team had more energy against San Diego than it did Sunday against UTSA.

The team lost the doubles point when sophomores Zach Nichols and Jack Seider fell to UTSA’s duo of Jorge Delgado and Daniel Moreiras.

“I think in doubles UTSA played better than we thought they would,” Borelli said.

Mbarek said the key to keeping the team on its winning ways is to maintain its energy.

The team works well together because they have all have the same goals, Mbarek said after the match.

Even though things went well during the weekend, Mbarek said he still needs to work on his focus during matches.

Borelli said the main thing his team needs to improve on heading into the second half of the six-match home stretch is its intensity and focus.

“We don’t have the intensity day in and day in out,” Borelli said.

The team also needs to be more mature, Borelli said.

Borelli said the chance to play at home is great because you don’t have to drive or fly anywhere and the fans are on your side.

These matches will be a good stepping stone for the team as it prepares for conference play beginning April 4, sophomore Casey Powerssaid.

The team will face Virginia Tech at home Friday at the Bayard H. Friedman Tennis Center. It will wrap up its home stretch with a match against Columbia University next Tuesday, March 17.

The No. 26-ranked women’s tennis team dropped a heartbreaker to the University of Michigan on Sunday, 4-3.

The loss dropped the team to 5-6 on the season while Michigan improved its record to 6-4.

“Michigan put a lot of balls in when we were up 3-2,” Hammond said.

In doubles action, the No. 21-ranked duo of seniors Macall Harkins and Anna Sydorska defeated Michigan’s No. 38-ranked pairing of Chisako Sugiyama and Tania Mahtani 8-1. TCU claimed one of the remaining two doubles matches to clinch the first point of the afternoon.

Sophomore Katariina Tuohimaa gave the Frogs a 3-2 advantage when she defeated Michigan’s Whitney Taney 6-0, 6-3. Tuohimaa’s record improved to 6-5 for the season after picking up her second-consecutive victory.

Tuohimaa said the team has worked together to get better as season has progressed and that the schedule has also helped the team grow as a unit.

“I think we have a pretty well-balanced schedule,” Tuohimaa said.

Hammond said the team needs to have a more focused mental approach be consistent.

“We’re a very good team but we have to do everything right to be a great team,” Hammond said. “We really feel confident and strong based on the fact we’ve played a tough schedule.”

Hammond said the team has to have better body language on the court and poise when it loses leads. He also said the team needs to stay loose as it prepares for its upcoming away matches.

The team was once again without a top contributor in junior Nina Munch-Soegaard, who is still nursing a shoulder injury.

Fresno State is up next for the Horned Frogs. The team will travel to California to take on the Bulldogs on Thursday before heading to Malibu to face Pepperdine University on Saturday.