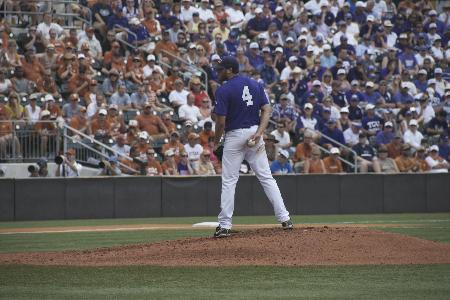 Texas starting pitcher Taylor Jungmann (8-3) shut down TCU and had plenty of run support on the Longhorns’ hits in a 14-1 win to even the best-of-three Austin Super Regional 1-1.

The third and final elimination game will begin at 3 p.m. Sunday on ESPN. The winner advances to the NCAA College World Series in Omaha, NE.

“Our non-hitting team showed up and hit,” Texas head baseball coach Augie Garrido said. “The difference was, like yesterday, the imperfections.

“Sometimes I wonder if college baseball isn’t more about the imperfections rather than the perfections.”

“Great day for Taylor Jungmann, we couldn’t match it on the mound or the defensive side,” TCU head baseball coach Jim Schlossnagle said. “We normally play really good, clean baseball and we threw a couple balls away. It’s going to happen, it just cant happen again.”

Frogs’ starting pitcher Steven Maxwell (11-2), drafted by Minnesota in the 12th round, couldn’t keep up with Jungmann, giving up five runs (none earned) in 3 2/3 innings; TCU committed three errors, which led to six unearned runs in the game.

“I think I had a little trouble establishing my fastball which has been my bread and butter all season,” Maxwell said. “The Longhorns made me pay for my mistakes and I have to tip my hat to them.”

TCU reliever Trent Appleby could not match Jungmann, either, giving up six earned runs before right-hander Greg Holle came in to pitch for TCU in the sixth inning. Holle pitched the final four innings for TCU, giving up two runs and three hits.

Catcher Bryan Holaday hit a double into the left field corner to draw first blood on Jungmann with one out in the first inning.

Holaday advanced to third on a wild pitch with two outs, but first baseman Matt Curry was unable to capitalize, grounding out to Jungmann and stranding Holaday on third.

TCU head baseball coach Jim Schlossnagle had previously emphasized that the Frogs must get runners on third base across home plate against Texas.

Texas right fielder Kevin Keyes, who homered Friday for Texas’ only run, singled to right with one out.

Longhorns’ third baseman Kevin Lusson singled off Maxwell for the second time in the inning, putting runners on first and second.

Maxwell seemed to be affected by the pressure situation, having problems throwing strikes to left fielder Jonathan Walsh, as the UFCU Disch-Falk crowd energized the stadium.

Maxwell battled back after falling behind 3-0 to strike out Walsh looking. Second baseman Jordan Etier flied out to right for the final out of the inning-Maxwell held his own, but at the expense of 33 pitches in two innings.

Maxwell continued to have problems finding the strike zone, walking shortstop Brandon Loy and first baseman Tant Shepherd back-to-back with one out. Maxwell grazed designated hitter Russell Moldenhauer to load the bases up for Rupp.

Pena robbed Rupp of an RBI single, snagging what looked like a sure-fire single to center, but TCU narrowly missed a double play back to second base that would have ended the inning.

The missed double play could have been the defining play of the game, sparking a four-run inning for Texas.

“That was a big play, we scored four runs off that (missed) double play,” Garrido said.

Keyes hit a slow dribbler to score a run, and Witte’s errant throw to first brought home another Texas run, putting the Longhorns up 2-0.

Schlossnagle pulled Maxwell after his third walk of the game in the fourth inning; right-hander Trent Appleby immediately missed a pick-off throw to first to advance Loy.

Shephard hit a RBI single to bring the Texas lead to 5-0.

There was no question which team won the pitching battle in game 2 by the end of the fourth inning.

Appleby loaded the bases up after he committed another throwing error on a bunt. Texas center fielder Cohl Walla knocked a three RBI triple into the gap and Loy hit another RBI single to bring the lead to 10-0.

Shepherd hit a two-run homer into the bullpen to continue the seven-run inning as the ‘Horns batted around the order in the fifth inning.

Featherston hit an RBI single in the eighth inning to keep TCU from being shut out, 12-1.

Texas added two more runs in the ninth inning to end the game 14-1.

“As soon as that last out was made (Saturday) the score is tied,” Schlossnagle said. “It’s a zero-to-zero game. So we will be ready to play tomorrow.”