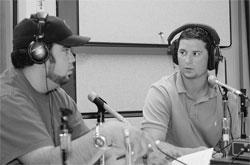 “Mad About Sports,” a sports talk show, will debut tonight on KTCU 88.7 FM The Choice. Russell Scott, KTCU’s station manager, said the show will focus heavily on TCU sports but will also cover sports on a national and local level, including high school.

Scott said “Mad About Sports” will be an hour long and will run feature segments on the Mountain West Conference, sports news and interviews with players and coaches.

Provost said “Mad About Sports” will be different than “Midday Madness” because it will feature a new format and updated material.

He said he wants listeners to call in to the show and get involved.

Provost, who had a summer internship with ESPN radio 103.3 FM, learned what a sports talk show is supposed to be like.

Duplisea said he did freelance work for ESPN over the summer and said he hopes to take the show to a highly professional level.

Scott has worked in sports broadcasting for 20 years and was a studio host for TCU-ESPN Regional Sports Network for five years, experience that Duplisea said will help make the show more polished.

“Russell Scott brings years of experience to KTCU,” Duplisea said. “He is incredibly professional and, although he has faith in Jon and I, he will critique us and tell us how to improve ourselves and the show.”

“Students involved in the program will gain experience and, in doing this, will have a great mentor in Scott,” Cohen said.

KTCU will also air head football coach Gary Patterson’s live media luncheons every Tuesday at noon on game weeks and will air a 30-minute pregame show before ESPN’s coverage of the football games, Scott said, adding that he hopes these shows will give fans more insight on TCU football.

Scott said the show will be well rounded, covering a variety of topics in sports news.

“Sports is the toy box of broadcasting,” Scott said. “You get to have a lot of fun.