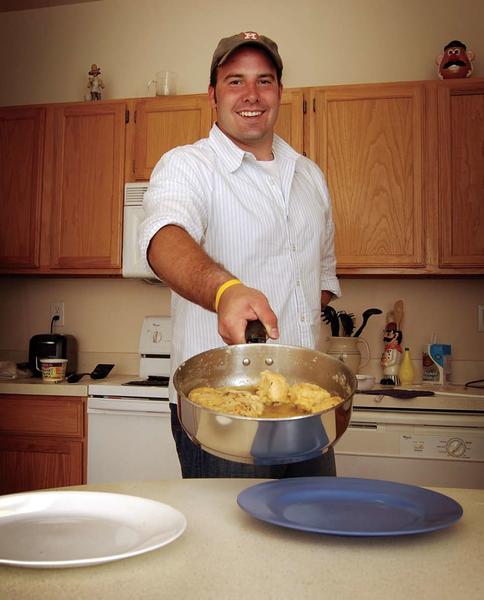 Sipping on his Frappuccino with tri-
ple whipped cream and cinnamon top-
ping he charmed out of the Starbucks
baristas, Drew Combs taps along to the
beat of the music in the bookstore cafÃÂ©,
casually commenting that he should
have been a drummer.
Combs, born with a left arm that
ends below the elbow, is a kicker for
the Texas Christian University football
team. He earned the kickoff position
during the summer and was also the
backup field goal kicker this season.
Now, he has his sights set on the field
goal position.
“I set really high goals for myself,
and I like to put things down on paper
to focus on them,” he said. “I might
not be the best guy out there, but I
want to succeed and I want to meet
my goals.”
Combs, a 22-year-old business
marketing major from Houston, has
played football since seventh grade.
Over the years, he has also played
basketball, track and field, baseball,
soccer and golf.
As a child, Combs looked to base-
ball pitcher Jim Abbott for inspiration.
Abbott, who also has only one hand,
played in the major leagues and won
an Olympic gold medal.
Like Abbott, Combs does not allow
only having one hand hinder him in
any way.
“If it ever was difficult, you just
have to overcome it,” he said. “That’s
life, and I’m the type of person
where if you want to try to hold me
down, I’m gonna get back up and I’ll
be twice as fierce as anyone you’ve
ever seen.”
Combs played football for the Uni-
versity of Arkansas after he graduated
from high school, but left Fayetteville
for Fort Worth after the fall of 2005.
Combs spoke with Dan Sharp,
TCU’s tight end and special teams
coach, and told him he wanted to be
a walk-on at TCU.
“Coach Sharp said you don’t need
no arm to kick a ball. It’s one of the
major reasons why I came here,”
Combs said.
Combs was recently rewarded for
his work ethic by being selected as
a member of Mark May’s All-Mayday
Team, which honors college football
players who have overcome obstacles
in their life. The players are chosen for
the mental and physical strength they
show both on and off the field.
“It’s definitely a huge honor,” he
said. “I don’t know if I’m deserving.
There are a lot of other people out
there who’ve gone through so much
more.”
Combs’ talents extend far beyond
the football field.
He has played guitar for more than
eight years, and has written 40 to 50
songs. When he’s not strumming Third
Eye Blind songs, Combs can be found
mountain biking around Lake Worth.
Combs does not let anything stop
him from accomplishing what he sets
his mind to.
“Drew refuses to take any grief
about his arm. His attitude is if you
can do it, then he can,” said Kev-
in Sharples, a sophomore business
major and fellow kicker on the foot-
ball team. “If anyone has any doubts
about his ability, I challenge them to
play him in basketball or catch with
a football.”
Combs, who plans to graduate in
May 2009, is not sure what he wants
to do after college, but is considering
law school or getting a private pilot
license.
“I just want to be a good father, like
my dad was for me,” he said. “I don’t
necessarily have to make the most
money, I just want to love what I do
for a living.”
Drew Combs cooks up lemon chicken in his apartment. In addition to cooking and playing guitar, Drew is kicker for the football team.