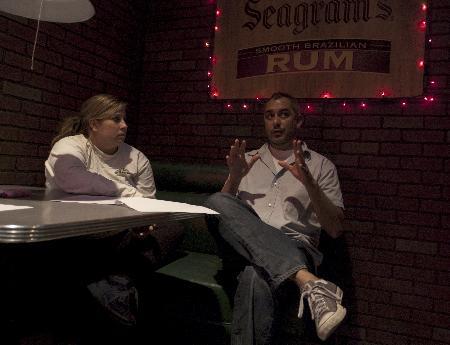 Rusty Mahmood graduated from college with a business degree thinking he would work in an office, but he didn’t expect to find himself working on NBC’s “The Office,” where he is the show’s assistant director.

In addition to “The Office,” Mahmood worked as the second assistant director for “The 40-Year-Old Virgin” and “Lemony Snicket’s A Series of Unfortunate Events.” Harshbarger directed and wrote the 1999 film “A Little Inside.”

Mahmood told students to always work hard on a job, regardless of its prestige. He said doing a small, entry-level job well could get an aspiring filmmaker or director noticed.

“Do a mediocre job amazingly,” Mahmood said. “Be the best copier. Make the best coffee ever.”

The film industry is so small that you have to do small jobs well, Mahmood said. Directors and producers would remember people who worked hard on simple tasks on a film set.

“If you keep on planting good seeds out there and busting butt … the only way to really fail is to quit,” he said.

Mahmood also stressed the importance of making connections and getting an internship. Working at a television station or on a film set as an intern would give students the opportunity to meet future employers, Mahmood said.

“Its hard and there’s a lot of people who want in and the doors are small,” Mahmood said. “But it’s not impossible.”

Harshbarger said her best advice was to befriend smart people with power in the film industry. She encouraged students to think in terms of business when writing film scripts, because production companies need to make money off of films.

“Hollywood is still reeling, like every other industry, from the economy,” Harshbarger said. “No one is taking any risks, so what you have to do is make yourself risk-averse.”

Harshbarger also talked about the positive aspects of the industry.

“We talk about how hard it is, but it’s so fun too,” Harshbarger said. “I would not have spent my 20s anywhere else in the world.”

Constance Fullerton, a junior FTDM major, said it was beneficial to hear how two film professionals started at the bottom and worked their ways up to the top.