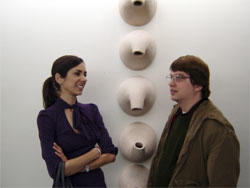 Students are playing a game of manipulation in the theatrical performance “The Shape of Things,” which will be presented Thursday through Saturday.”The Shape of Things” is a drama about a woman who uses her relationship with a man to manipulate him into changing physically, mentally and emotionally. The man is completely unaware she is using him for her thesis toward her master’s degree.

Jage Bothmann portrays Adam, who is so eager to find love that he will do anything to keep it and is oblivious to the changes that Evelyn, played by Mariana Fernandez, asks for.

“Evelyn is an artist,” said Fernandez, a senior theatre major. “She uses a dorky guy who has never been in a relationship for her own project, and he becomes her artwork.”

The characters in the play toy with human emotions and try to determine where to draw the line with art versus humanity.

“The play is essentially about society’s perception of people,” said Bothmann, a sophomore theatre major. “It touches on what society views as beautiful and what the perfect person would be materialistically.”

“The Shape of Things” is a contemporary play that takes place at a college campus.

“Anyone can relate to any of these characters,” Fernandez said. “Each one of the characters is flawed and makes mistakes. It makes them human. They are all likeable as much as they are unlikable.”

Unlike other studio shows performed in the Walsh Center, “The Shape of Things” will be presented in the Hays Theatre and is directed by senior theatre major Kristin Quaid.

Studio shows are designed and directed by students with smaller budgets but are still part of the regular theater season. They are free for anyone to attend.

Rehearsal time has been much shorter than that for a main stage show, but the cast has been practicing five times a week for the past month.

“The quality and caliber of this show is still as great as a main stage show,” Fernandez said.

“The Shape of Things” was written by Neil LaBute and was also made into a movie starring Rachel Weisz (“The Constant Gardener”) and Paul Rudd (“The 40 Year Old Virgin”).

Some students who have seen the movie are excited about the play.

“It’s a modern version of Adam’s seduction by Eve,” said Stefanie Grows, a freshman entrepreneurial management major. “The story is a bit twisted, but those always make for the really great shows.