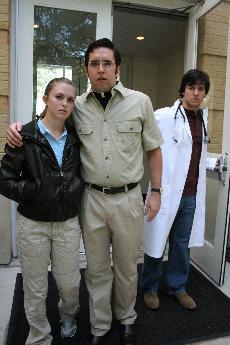 Editor’s note: This story was edited for accuracy 11:36 p.m. Thursday.

Sophomore theatre major Curt Mega wasn’t trying to ruffle any feathers when he sat down to study his lines for “The Laramie Project” at a local smoothie shop.

Another customer asked Mega what he was studying. Mega said he was learning his lines for a play about the murder of a young gay man in Laramie, Wyo.

“And then he went off on how gay people deserve that,” Mega said. “And then he was like, ‘Well, I hope God gets a hold of your soul and pulls you out before you continue on with it.'”

Mega said the confrontation reminded him that the message of “The Laramie Project,” which opens Tuesday at the Hays Theatre, has relevance to the Fort Worth community today.

It’s been almost 10 years since Matthew Shepard was beaten to death in October 1998.

Assistant theatre professor Alan Shorter, who directs TCU’s production of “The Laramie Project,” said the controversy surrounding Shepard’s murder is just one of the unique challenges that comes with staging Moises Kaufman’s play.

“The Laramie Project” is a compilation of more than 200 interviews between the members of Kaufman’s theater company, Tectonic Theater Project and the residents of Laramie in an attempt to document the effect Shepard’s death had on the town. The project took two years and six trips to Laramie to complete, Shorter said.

“The play is sort of narrated by their event of going there,” he said. “So the actual original actors appear as characters in the play as well. They provide the continuity.”

Although the production features more than 65 characters, the cast consists of only eight actors, Shorter said. Cast members use props or partial costume changes to indicate a change in character.

Playing characters based on real people can be tricky, too, senior theatre major Meg Bauman said, who plays the police officer who found Shepard along with several other characters.

“It’s not just up to our artistic instincts to create a person,” she said. “A lot of research has gone into it.”

In some cases, an actor’s performance is influenced by old photos and videos of the actual person who was interviewed, Bauman said. In other cases, the actor decides to play the character in his or her own way.

Children younger than 13 shouldn’t come to see “The Laramie Project” because it discusses Shepard’s murder in graphic detail, Shorter said. The description is a necessary part of the production, he said.

“It’s funny, because I think that question of, ‘Well, why should we do this?’ arises a lot especially because it deals with violence toward a gay young man,” Shorter said. “And yet we don’t ask that same question when it’s Hamlet, and there are multiple murders at the end of the play.”

The first performance of “The Laramie Project” kicks off Erase Hate Campaign, a two-week series of events sponsored by Brite Divinity School, Gay-Straight Alliance, the Office of Religious and Spiritual Life, Student Affairs and the theatre and social work departments. The campaign focuses on hate crime prevention.

Where: The Marlene and Spencer Hays Theatre, located in the Mary D. and Howard F. Walsh Center

Cost: $10 for the general public, $5 for senior citizens, faculty and staff and students of TCU and other schools.