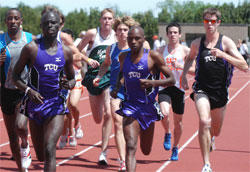 The TCU Flyin’ Frogs are about to begin their biggest outdoor match this season – or at least three of them, anyways.Senior Katrina Zielinski, junior McKale Davis and sophomore Cassie Hostick will be TCU’s only three representatives on the first day of the 79th Clyde Littlefield Texas Relays track meet in Austin.

Both Zielinski and Davis will compete in the women’s 10,000-meter invitational run and Hostick will race in the 1,500-meter run.

Today’s competitions are only the first of many at the Relays, which extends through Sunday. Head coach Darryl Anderson said the events, which will be held at the University of Texas’ Mike A. Myers Stadium, have a high level of intensity.

“It’s the biggest meet in the outdoor season so far,” Anderson said. “But it’s only our third.”

Other TCU notables that will compete in later events include sophomore Virgil Hodge, who already has several gold medals on the season; freshman Justyn Warner, who has further bolstered the Frogs’ sprinting success; and senior distance runner Kip Kangogo.

Although sprint events have always been TCU’s strong suit, Anderson said today’s medium-distance runs will not be used as a measuring stick of the team’s ability.

“It’s not so much a gauge of ability,” Anderson said, “but it’s a gauge on how we’re growing as a team. I’d like to see (growth) in the distance kids, the field kids, everyone.”

The Relays are also an open meet, which means some races will also include professional athletes. Davis and Zielinski’s event will fall into that category. Hostick’s race is a collegiate-only one.

Although Anderson said he could not predict levels of individual success, he said the team’s objective has always been to be competitive.