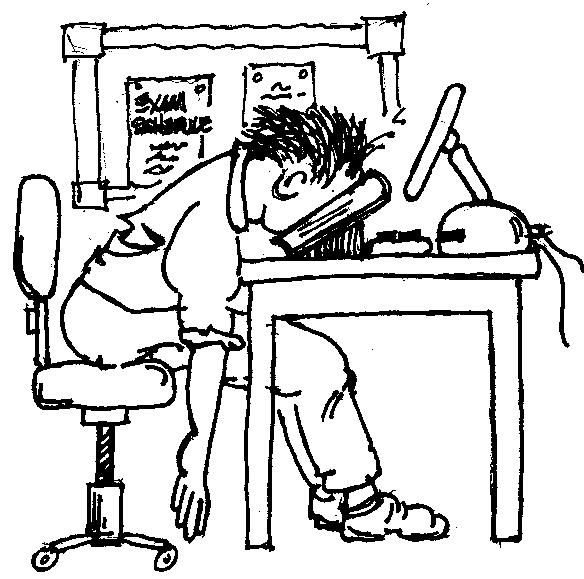 Finals are fast-approaching and many students know that when faced with such an important time, anything that can go wrong, will. But mastering skills like pre-planning, time management and list making will help students cope with the stress of finals week, a psychology professor said.

“A major source of stress is the overlap of exams and uncertainty about how grades are determined in each course,” Papini said.

Sophomore pre-major Patrick McCaffrey said he went out partying the night before his government final and completely missed the exam.

“I somehow woke up in one of the model rooms at the GrandMarc wearing an American flag T-shirt, completely unaware of how I got there,” he said.

McCaffrey said the professor gave him special permission to take it after the designated time because he had to catch a flight back to St. Louis that night.

“I studied all weekend for a math final that I thought was on Tuesday,” Gunter said. “Turns out my biology exam was on Tuesday, and my math wasn’t until Wednesday.”

Having no time to study, Gunter said she took the biology exam unprepared.

“Needless to say, I was a little frazzled about the whole matter, but at least I was prepared for my math final the next day,” Gunter said.

Papini said students should use their experience with finals to help quash excess anxiety and stress.

“If I make a to-do list and I cross off all the smaller things I need to do…then it’s easier for me to study and really sit down and focus,” Wucinski said.

Papini said the best way to produce strong memories while studying is to understand the material and spread study sessions over as long a period of time as possible. He warned that waiting to study until the day before a final will not work. He also said students should actively read, not just skim course material.

According to the university Counseling, Testing and Mental Health Center, mental breaks like grabbing a snack or taking a walk are necessary to relieve stress and refocus.

For students who still become frazzled around finals time, Papini said nerves aren’t always a bad thing. He said some level of anxiety will actually enhance a student’s performance during an exam.

“There is something called the Yerkes-Dodson Law which basically says that performance is an inverted U-shaped function of arousal,” Papini said. “Thus, an optimal level of arousal or anxiety or stress will actually favor a student’s performance on an exam.”

Sophomore psychology major Hannah Mering said anxiety and stress led her to over study for an exam.

“I spent 36 hours studying for my child psychology exam and ended up forgetting most of the information when I actually had the final in front of me,” she said.

A self-described naturally anxious person, Mering said she ended up making an A in the course.

Stories like Mering’s prove some amount of anxiety and stress can be good, Papini said.

1) Learn to plan ahead and manage your time.

2) Avoid multitasking – focus on one thing at a time.

3) Read material more than once and don’t just skim.