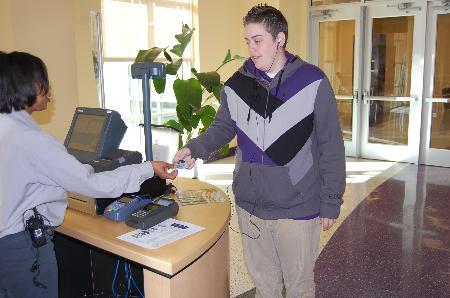 Simply To-Go, which opened Jan. 19 at Sub Connection, allows students on any of the Silver, Gold or Platinum Frog Pass plans to purchase a pre-packaged sandwich or salad meal that includes a fountain beverage and the choice between a cookie, fruit or a bag of chips for the cost of a swipe, said Legia Abato, marketing manager of Dining Services.

The pre-packaged meals are not made by Sub Connection, she said, and if students want to order off the menu, they will have to pay with Frog Bucks.

“We’ve heard consistently that there was a need for food service on the east side of campus that would be part of the meal plan,” Abato said. “It seems to be well-received thus far.”

Frank Horak, supervisor of Sub Connection, said his staff had to adapt to the newfound sandwich demand.

“We’ve had to bring in more sandwiches every day as the business has increased tremendously,” Horak said.

Rick Flores, general manager of Dining Services, said the university decided to offer Simply To-Go because students needed a convenient eatery that was both on the east side of campus and covered by the Frog Pass.

“We had about 32 participants on the first day, and it has steadily grown,” Flores said.

“I think it’s more convenient because you don’t have to use Frog Bucks,” she said.

Emily Silva, freshman business major, said she enjoyed the convenience of the new option as well.

“A lot of my classes are over here, and I have short breaks,” Silva said.

Abato said students have to wait three hours after using Simply To-Go before they can use their swipe cards again at Market Square. The three-hour pause is a “meal zone,” which is the time period when students will be satisfied after eating a meal, she said.

“Our goal is to keep the integrity of the program,” Abato said. “It is a convenience option because you are using it when you don’t have time to go to Market Square.”

Simmons said despite having used Simply To-Go five times, the three-hour pause has not caused her any inconveniences.