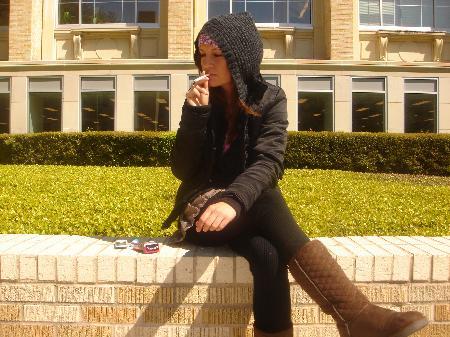 Students may think twice about lighting up a cigarette to ease the stress of school now that a new tobacco tax increase has gone into effect.

The largest federal tax increase in history, which went into effect April 1, raises tobacco taxes from 39 cents per cigarette pack to $1.01 per pack. According to the Children’s Health Insurance Program Reauthorization Act of 2009, it increases excise tax rates on cigarettes as well as cigars, cigarette papers, smokeless tobacco, pipe tobacco, and roll-your-own tobacco.

With this new tax increase, Texas smokers may be some of the hardest hit because they already face a state tax on cigarettes of $1.41 per pack. Texas smokers are going to have to pay for the state tax and the new federal tax of $1.01 when buying cigarettes. Average prices for a pack of cigarettes in Texas will now range anywhere from 6 to 8 dollars per pack.

Tim Lee, a senior accounting major, said he smokes about a pack of cigarettes every day but was not aware of the new tax increase.

“Now that I know how much the price went up I would like to quit,” Lee said. “I have thought about quitting before but since the prices have gone up so much I don’t think I can afford it as a college student,”

President Barack Obama signed the bill in order to fund the expansion of the State Children’s Health Insurance Program. According to the bill the purpose of the act is to provide dependable and stable funding for children’s health insurance in order to enroll the six million uninsured children who are eligible, but not enrolled, for coverage today.

Michael Katovich, a sociology professor who teaches classes about drugs and alcohol, said tobacco taxes known as “sin taxes” have a great paradox about their name.

“The paradox is that one foundation of the tax is used for health reasons to support children’s hospitals and research, so the imposition of a sin tax is designed of traditional imposing of the greater good,” Katovich said. “But the tax relies on people to engage in sin so that others can engage in pure research or what we consider to be purity, so it is combining purity and danger.”

“I don’t smoke all the time, and I smoke more in social settings than when I am stressed,” Phillips said.

Phillips said the new tax will not affect her purchasing habits because she has paid higher prices for cigarettes in places like New York which has a higher state tax on tobacco than Texas.

Yvonne Giovanis, assistant director for the Alcohol and Drug Education Center, said according to the CORE Drug and Alcohol survey from spring 2008, which is taken once every 3 years, students tend to smoke more socially than for any other reason.

“I think this is really reflective that our students tend to do it only in social situations,” Giovanis said.

Giovanis said that if this is something important to students then they will find the money to spend on it.