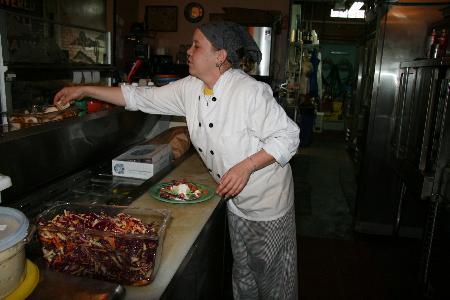 Heather Hogan always told herself she would become the editor of Reader’s Digest someday, and she was on her way, until she left it all behind to pursue a childhood dream.

Hogan, a TCU alumna, said she never thought after graduating she would eventually work as a full-time chef at Lili’s Bistro in Fort Worth — an occupation that once seemed unrealistic when compared to a steady desk job that would have gone hand in hand with her English degree.

She now prepares entrees, such as escargot and fresh herb-stuffed pork tenderloin for customers, but these gourmet dishes don’t suit the life of a chef who often opts for macaroni and cheese after a long day’s work.

Hogan’s cooking craze developed at a young age, but she said it was not considered a “real job,” and was much less glamorous when she was growing up – two things she said have changed with time.

At the age of 10, Hogan experimented with elaborate meals by attempting to cook romantic dinners for her parents.

“My grandmother used to tell me, ‘I knew this was coming because other kids were watching cartoons and you were watching cooking shows,'” Hogan said.

Hogan’s interest in the culinary arts was a way to avoid conflict with her father, who wanted to watch sports television on Saturday afternoons, something Hogan had zero interest in.

The only channel the two could agree on was Saturday afternoon public cooking shows, said Hogan, who grew up watching gourmet chefs like Julia Child.

Hogan’s interest in cooking did not fade with time; she enjoyed working various jobs at restaurants growing up, but never considered taking her passion a step further.

TCU did not offer a culinary program when Hogan was in college, so she took cooking classes at Central Market to keep her passion alive.

Eventually, an opportunity arose for her to test her cooking skills overseas.

“I cooked over an open fire with women in Haiti,” said Hogan, whose mission trip in 2000 helped develop and intensify her passion for cooking.

Touched by her trip to Haiti, Hogan traveled to Africa twice in 2001 and again a few weeks ago.

While visiting, Hogan asked an African woman to cook with her. They set two pots side by side and cooked stew simultaneously. When finished, Hogan said, the cultural difference was unquestionable.

“Some of these people are starving and don’t know what to do with what they have,” said Hogan, whose said her concern for others’ health instigated an interest in nutrition.

Hogan said Americans do not know how to eat either; family dinners she had when she was growing up are rare in society today, she said. This desire to bring families together at mealtime fueled her fire to pursue a cooking career.

Hogan decided to apply to the Texas Culinary Academy in Austin, a school affiliated with the original Le Cordon Bleu in Paris.

When attending the academy in 2003, Hogan found that a large majority of students were career changers just like her who decided one day to brave it and follow their real passion in life.

Culinary school, which was based heavily on French cuisine, lasted about one year and required more than 200 hours of hands-on experience in the restaurant business, Hogan said.

Hogan moved back to Fort Worth and fell in love with Lili’s Bistro after eating there with friends. Shortly after, Hogan joined the staff at Lili’s Bistro in July.

Hogan said the menu choices reflect the owner’s Greek and Italian background. They also have a few French and Asian items as well.

The menu changes every quarter to keep up with the seasons, said Hogan, whose creativity is challenged by Vance Martin, the owner of the eclectic restaurant.

Hogan also said she prefers the freedom of cooking at Lili’s Bistro as opposed to cooking corporate food, where the menus are prepared.

Hogan’s role in the kitchen could easily be compared to an artist, someone whose intricate designs are created to sit picturesquely on vivid plates.

The kitchen shelves are filled with various sauces that contribute to the food’s colorful display while adding flavors original to Lili’s Bistro.

“People in the restaurant business are the worst consumers,” said Hogan, who grows tired of food after spending hours in a kitchen.

Hogan, who would much rather spend hours cooking for others than herself, said she has an incredibly lucky life.

One of Hogan’s life goals came from a piece of advice a TCU professor gave her.

“He said, ‘I did everything I needed to do by the time I was 30 so I could sit back and be grateful for everything I had,'” Hogan said. “I want to be like that.”