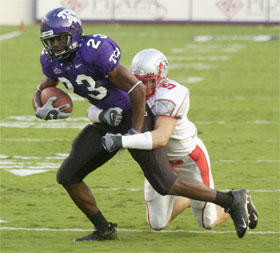 After dealing with more than 165,000 hostile fans on the road this year, the 32,000 the Horned Frogs will face at Wyoming on Saturday might be the most intimidating.”I heard that it’s the toughest crowd we’ll play in front of this year,” head football coach Gary Patterson said. “You have two 4-1 teams that are undefeated in conference … I’ll be disappointed if it isn’t sold out.”

The Wyoming Cowboys are 2-0 at War Memorial Stadium this year and currently enjoy a 7-1 home record back through 2004. Patterson said TCU will have to continue this season’s road success (2-1) in order to keep its head above water in the Mountain West Conference.

“We have to come and play because we still have two more road games after Wyoming,” Patterson said. “We could be in it or out of it before we play our last two home games. When you go on the road, you have to take the ballgame.”

The TCU secondary will have to play better against the pass this weekend than they did in their last away game, when they gave up 176 yards and three touchdowns to Brigham Young wide receiver Todd Watkins.

Patterson said Wyoming wide receiver Jovon Bouknight, a preseason All-American candidate, will be under close watch by the TCU defense.

“We always have to know where (Bouknight) is,” Patterson said. “They move him around all over the place. He’s very similar to (TCU wide receiver) Cory Rodgers. He is one of those guys that really gets your team going.”

After two weeks of defensive miscommunications, senior cornerback Drew Coleman said, the secondary is focusing on the fundamentals.

“We’re just going back to the basics,” Coleman said. Getting into the right checks and read, things like that. We know where we’re going to get attacked.”

The Frog offense is averaging a healthy 30 points a game, but Wyoming leads the conference in pass defense, scoring defense and total defense. It has allowed only 17 total points in two home games this season.

Patterson said the Cowboy defense will be tough to crack.

TCU junior quarterback Jeff Ballard, starting his second game in place of the injured Tye Gunn, said the Cowboy defense will look to contain him after his six-touchdown game Saturday against New Mexico.

“I think they’ll probably try to keep me from getting to the outside,” Ballard said. “They’ll try and keep me from running around.”

Scouting reports, film and statistics aside, Patterson said, the game will have its fair share of surprises since the two teams have only met once before, in 1998.

“Really, what do we know about Wyoming?” Patterson said. “Same thing, what do they know about TCU?