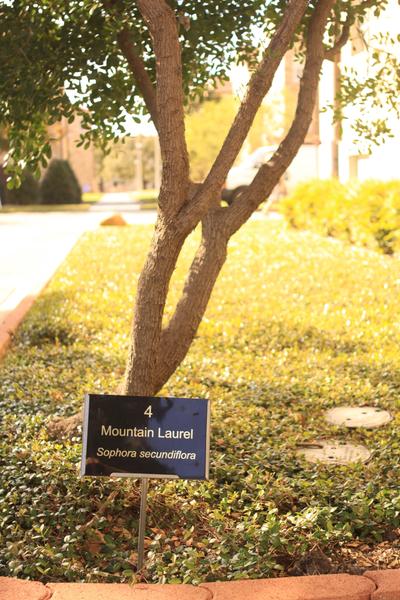 Long before the first students set foot on the university, TCU’s campus was prairie land. Most of the trees seen on campus were planted by hand. Now, thanks to the efforts of the Heritage Tree Tour committee, students and visitors can learn about the trees’ history and the impact they have had on the university’s environment, Provost Nowell Donovan said.

Justin Hughes, a graduate student studying environmental management, wrote in an e-mail that the tour consists of 14 different species of trees, ranging from native pecans to non-native ornamentals, such as Chinese pistachio and crape myrtles.

Labeling the trees is significant to viewers because it shows how people used the trees in the past for their daily resources, Hughes wrote. For example, Native Americans used sycamore trees to lead them to water.

Donovan said the trees on the tour have plaques with the Latin and formal names and a brief description of the history behind the tree. More details about the trees are provided on a website created by the committee.

The most notable and famous tree on campus is the American elm tree, which is located on the far side of the Brite Divinity School, Donovan said. The American elm tree was recognized for the best tree in North Texas last year, he said.

Hughes, who helped work on the tour for a class, wrote that the tree tour goes through the west side of campus around Sadler and Clark Halls, but there have been plans to expand the tour. It’s not guided, so anyone can take the tour by simply beginning at the first tree, the American sycamore, and following the signs, he wrote.

Hughes wrote that students should participate in these tours because trees provide a number of environmental services.

“Trees produce oxygen, provide shade, stabilize soil, cycle nutrients and provide habitat for animals,” he wrote. “And for that, they are invaluable.”

Donovan said the environmental science classes are beginning to incorporate the tour and research on the trees in the freshman labs and lectures.

In addition to the tour, Donovan said that in an upcoming project, two slabs will be cut from a dying tree that was removed from the area between the Tom Brown/Pete Wright Apartment Community and Sadler Hall. Students from the environmental science department will count the rings to determine the tree’s age. The slabs will be displayed on campus, and for every ring there will be a university history mark to identify significant dates, he said.

Plans for the locations of the slabs include the Heritage Center in the Brown-Lupton University Union and the gallery of the Sid Richardson building by the environmental science department, Donovan said.