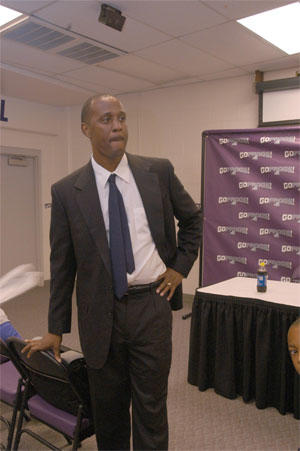 The TCU track and field team heads to Arkansas Friday for its fourth tournament of the year, the Tyson Invitational.Head coach Darryl Anderson said the event’s field is not only large, but talented.

“It’s a bunch of top 20 teams,” Anderson said. “It’s a 20-team competition with teams from the Big 12, like Oklahoma, Oklahoma State; the SEC like Florida and Arkansas, the host team. It’s going to be a huge array of talent.”

Even though the Horned Frogs have been successful so far in 2006, Anderson said, this weekend will be the toughest test yet.

“It’ll be the most competitive meet we have been in this year,” Anderson said. “It’s kind of a pre-NCAA tuneup. You’ve got 90 percent of the top 20 (there).”

The men’s squad was forced to deal with illness at its last tournament Feb. 4, but that will not be as much of a factor come Friday, Anderson said.

“We’re doing good; we’re getting better,” Anderson said. “It’s a health issue from the standpoint of the flu virus going around. We have got a couple guys down with that. It’s that time of year where we have some knicks and knacks. We’ve got nothing serious that will keep us out of our long-term things.”

Though sophomore sprinter Bradley Reed will not race this weekend, the 400-meter relay team will still compete.

“We’re planning on running it,” Anderson said. “We’ll be a little undermanned in that. You go in and do what you do; anytime someone is down, it gives another opportunity for someone else to step up.”

The team will look to ride the momentum built off of its last meet, a performance that saw the Frogs take home eight golds. Freshman Justyn Warner and sophomore Virgil Hodge were both named TCU’s student-athletes of the week.

Anderson said both are bringing positives to the team.

“Hodge has been great. She’s shown some leadership, she’s given some direction to a young team, she’s given a presence. Some identity as you may say,” Anderson said. “(With Warner) being a freshman, being under the radar, he’s training hard, doing the things he needs to do. He’s learning the system; he’s very passionate about being successful.