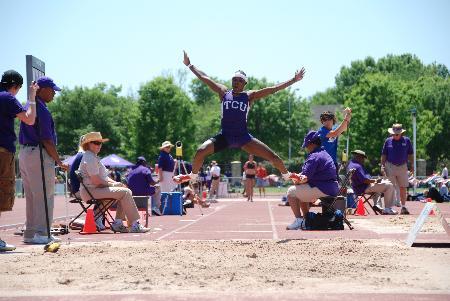 The university track and field team opens its indoor season at the Texas Tech Invitational in Lubbock on Saturday and looks to use the meet to set the routine for the season, the team’s head coach said.

“We’ve got to get used to travelling, getting on the bus, kids being on time, all the little things that we have not done this year,” head coach Darryl Anderson said. “Obviously, if we can get some quality performances that would be great also.”

Before this week the team had not trained together since Dec. 1, Anderson said.

“Indoor season is a short program so we’ve got to get started,” Anderson said. “We don’t have time to ramp it back up and go through the three-week training program to get everybody prepared. We’ve just got to go through it and do the best we can do as far as making sure everybody is in the right frame of mind physically and mentally.”

Anderson said he is looking for quality performances from sophomore sprinter Mychal Dungey and junior sprinter Jessica Young. He also said he would like to see strong starts from junior Neidra Covington, who competes in long jump and triple jump, and senior shot-putter Candis Kelley.

Young will run the 55-meter dash at the meet and said she has a personal goal.

“The 55 doesn’t really get run that much,” Young said. “I’m thinking I should be able to break the school record.”

“I’m just going to run,” Young said. “It’s the first meet, so the coaches aren’t really putting that much pressure on us. This meet is really to get everyone prepared. It’s basically to get us back into competing again and to have a relaxed meet where we can just run and get back into the swing of things.”

Anderson said he calls the time right after Winter Break the most precarious time of year for keeping people on the same page and keeping people in good health.

“Every year we go through it, and every year we end up working our way through it and being OK,” Anderson said. “The biggest thing for us is to get in, get the season started and to get out of there healthy.”