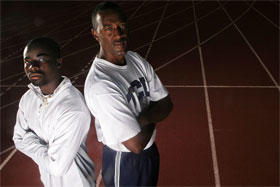 At first glance, they really don’t appear to have that much in common.One tall, the other short; a discrepancy made all the more obvious when they stand next to each other, making soft conversation as they pose for pictures. One a jokester, teasing about the other’s girlfriends as he quietly takes the congenial ribbing. And, of course, one the teacher, and the other the student.

But then again, people should rarely be judged based on first glances.

Quite the contrary, the tall teacher with the jokes – head track coach Darryl Anderson – and the short, reserved student – junior sprinter Lewis Banda – have formed a relationship that spans from the oval to the classroom to across international borders.

Anderson and Banda, a 2006 NCAA All-American, have a pre-TCU history that dates back to when Anderson was the head coach at Arizona State University and Banda was just a freshman from Zimbabwe; though that was back in 2003, Anderson’s memory remains fresh.

“When he got here, when he got off the plane from Zimbabwe in Tempe, Arizona, there was a cultural barrier, a language barrier,” Anderson said. “He was leery about the environment that he was in, the environment he was leaving for.”

Banda said Anderson, who was his primary contact before he came to ASU, was pivotal in his adjustment to a new way of life.

“I mean, he was the first person I talked to on the phone when I was in Zimbabwe, and he was the guy who brought me to ASU, so when I got to ASU, he was the only person I would be talking to almost every day,” Banda said. “I mean, I talked to other coaches, but every time I had a problem, I would go to him first.”

After Anderson left to become TCU’s head coach in November of 2004, Banda was alone, without coach or mentor. Naturally, there were ramifications.

“Well, I mean, I could’ve stayed a year at ASU to see how it was going to go, see how I was going to run,” Banda said, “but I didn’t really run well so I decided to make a change, hoping with my old coach, I would run better. After that whole year – 2005 didn’t go so well – I decided to come over here.”

Luckily for Banda, Anderson proved to be the remedy he was seeking.

“My confidences went up,” Banda said. “I know what he’s capable of doing, what he’s done in the past, so I was like ‘OK, come here.’ Now I’m going to run fast, and my goal is to win the NCAA championships.”

Anderson said Banda’s move not only brought him a friend, but also a locker-room example.

“I mean I think it’s kind of a lot of fun for us to get back together from my point of view because he brings so much to the table because he’s such a hard worker,” Anderson said.

“I look up to him as a role model,” Warner said. “From the start, when I first came here, he was always bringing me around everywhere. I was just following him around, and I realized that he does work at practices, works hard at the meets and shows off at the meets, so I just look up to him and try and follow what he does.”

There’s more to Banda’s coach than just training, however. For Banda, Anderson may be a life preserver as well.

“He’s one of the few student-athletes that I’ve had the opportunity to work with that you have to hold them back in training because if you let him go full-bore, he’d kill himself,” Anderson said. “And I’m not exaggerating.”

Although Banda’s tireless work ethic is usually a positive, he said, it can also work against him – and can get under his coach’s skin as well.

“I always nag him to give me more work to do,” Banda said. “He doesn’t like that because he knows what he’s doing … I get this feeling in my head where I’m like ‘Man, I don’t feel like I did anything today,’ but he’s like ‘No, no, it’s enough.'”

But Banda’s dedication doesn’t revolve around just track. He said his workaholic approach applies to many aspects of life: a creed passed on to him through Anderson.

“He’s helped me in both the classroom and in school,” Banda said. “This is what he told me when I came to the U.S.: ‘Your top three priorities are your school and then your track and then your social life.’ So that’s what I like to live by. Every time, I just say ‘get my school out of the way.’ If my school is good, my track is going to be good.”

Coaching aside, the two – although they’re more than 20 years apart in age – have become somewhat of a two-man family.

Part of that trust, Anderson said, stems from the surrogate parent role he has had to fill for Banda.

“I felt like when he got off the plane from Zimbabwe, he didn’t have any support services here or groups here by the way of mom, dad, so on and so forth,” Anderson said. “His mom trusted her son with me, so within the NCAA rules, it’s my responsibility to take care of him the best I could.”

Warner said the pair’s relationship is obvious to the entire team – and a source of friendly amusement.

“Everybody notices,” Warner said. “Everybody calls coach Anderson to him as daddy. He’s always making sure he’s Ok, making sure nothing’s hurting him, looking out for him.”

And keeping in the spirit of good humor, Anderson said, it has been nothing but an enjoyment to see Banda progress both as an athlete and, more importantly, a person.

“He has grown, he’s found his person,” Anderson said. “(It used to be) I could hardly understand him when he spoke – I constantly asked ‘could you say that again?’ Now sometimes I know what he wants before he even says it. Watching him grow has been a lot of fun.