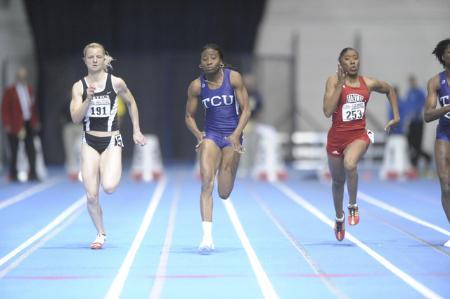 She is one of the most accomplished track and field athletes in the NCAA, having earned a spot on her country’s track and field team for the upcoming Beijing Olympics, and received more All-American awards than any other female in TCU history.

Senior Virgil Hodge finished her final indoor season March 14 in Fayetteville, Ark., at the NCAA Track and Field Indoor Championships. She finished seventh in the women’s 200-meter dash at the championships while clocking a season-best time in the event.

At the conclusion of the competition, Hodge was awarded the Mountain West Conference Women’s Indoor Track and Field Student-Athlete of the Year. Hodge was also named an All-American for the sixth time.

“It is always nice when you are rewarded for your hard work,” Hodge said. “It is easy to do well when you have good teammates and coaches like I do.”

The native of St. Kitts and Nevis had a strong showing at this year’s Mountain West Conference Indoor Championship. She beat the field in both the 60-meter and 200-meter dashes for the second straight year. Following her victories, Hodge was given the 2008 Women’s Outstanding Performance award.

Hodge will graduate with a degree in communication studies in May, but is not finished with her TCU career just yet. The Flyin’ Frogs’ outdoor season began March 22 at the Lowdon Track and Field Complex for the second annual Horned Frog Invitational.

What Hodge is most looking forward to about this year’s outdoor season are the NCAA Championships at the end of June. It will be the first time that someone from her family will get to see her participate in a race as a Horned Frog.

“Nobody from my home back in St. Kitts has ever seen me run for TCU, except for on the television,” Hodge said. “My mother will be coming down for the championships in June. We are both very excited about it.”

The last time Hodge went home was last summer. She went back to St. Kitts to compete in a race to qualify for her home country’s Olympic team, race in the Pan American Games and participate in the inaugural North and Central American and Caribbean Championships. She won the 200-meter race and placed sixth in the 100-meter race.

“I am always excited when I get an opportunity to go back home,” Hodge said. “Whenever I also get the opportunity to race while I am back at St. Kitts, it makes the visit much more meaningful for me and my family.”

On the track, Hodge and the Flyin’ Frogs are all business, but outside the lines, they are friends and classmates.

“When we are on the track, whether it is practice or at a meet, it is serious because we are trying to get better and work on correcting our mistakes,” she said. “But, when we get off the track we hang out, laugh, cry and spend time with each other just like we do with other friends.”

Hodge even cooks Caribbean food and invites the whole team over to her place for dinner.

“Anytime Virgil says she is cooking there’s no doubt I’ll be able to make it over because I love to eat,” said Hodges’ teammate, Jessica Young. “I never used to eat red beans with rice, but now it’s one of my favorite things to eat.”

Junior shot putter Candis Kelley is another one of Hodge’s teammates who enjoys her cooking.

“Virgil is famous for her chicken and rice on the track team. She is a really good cook and enjoys cooking for the team,” Kelley said.

Once the outdoor championships are finished, Hodge said she will take a couple of weeks to go home and spend some time with her family. But it won’t be long until she is traveling and training again for the Olympics.

“After I finish resting up at home, I will spend some time in Europe competing in events that will have strong competition and hopefully help get me ready for the Olympics,” Hodge said. “I am very busy and there is not a lot of rest time, but I know I have to keep working year-round if I want to be the best I can be.”

Hodge does have plans for life after track and field. She says that she has always been interested in travel and hopes that she can make a career out of it in the future.

“I really would like to use my communication degree to complement my enjoyment of travel and learning about new places,” she said. “I think that I will try to work for an airline company and see where it will end up taking me.”