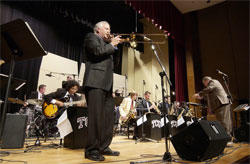 The TCU Jazz Ensemble is presenting a fundraising concert today to raise money for its tour of Italy this summer.The tour will last from July 8 to 19, and the ensemble of about 25 musicians will travel to multiple cities including Fort Worth’s sister city, Reggio Emilia, said Curt Wilson, director of Jazz Studies.

The fundraising concert is a salute to the big bands from the Swing Era of the 1930s and 1940s, Wilson said.

“It’s a $3,200 trip, but thanks to fundraising like this concert, contributions and the School of Music’s budget, the students are only having to pay $1,250,” Wilson said.

The ensemble will perform twice at the Umbria Jazz Festival in Perugia on July 11 and 12.

He said the Umbria is one of the most well-known jazz festivals in Europe.

Most of the musicians at the Umbria Jazz Festival are professionals, but there are also a few college bands selected to play, Wilson said.

The Jazz Ensemble auditioned for this festival by sending in its “Leap Frog” CD, Wilson said.

“This CD was chosen as one of the top-10 college CDs in the U.S. by the International Association of Jazz Educators,” Wilson said.

Wilson said that out of his 31 years at TCU, this is his seventh international tour.

“A lot of schools audition, so this is a big deal,” he said.

The Jazz Ensemble will also play in Reggio Emilia on July 14, the Valdarno festival in Tuscany on July 15 and at Lake Como on July 17.

The ensemble will also travel to Rome, Florence and Milan to experience the culture, art and architecture of Europe, Wilson said.