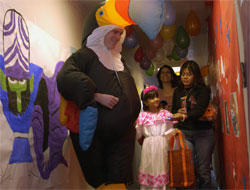 Ghosts, goblins, popcorn, haunted houses and enough candy to feed a small country. All this can mean only one thing at TCU – Colby Halloween. “It’s the 33rd year to hold Colby Halloween, and we are expecting at least 600 people to go through,” said Missy Nauman, hall director for Colby Hall.

The Halloween festivities are held once a year by residents in Colby Hall, and this year residents from Clark Hall pitched in to create a haunted house in Colby’s basement.

Marcy Paul, director of the Women’s Resource Center, attended Colby Halloween for the third year in a row with her 7-year-old son Isaac.

“He always has a fun time, and it’s a great way for the TCU community to come together,” Paul said. “I think it’s one of the greatest times of year when this campus is involved with faculty and staff from all over campus.”

“This year, the festivities included a “scary side” and a “nice side” in the dormitory,” Nauman said. “Each room provides 500 pieces of candy so we make sure there is enough to go around.”

LeighAnn Weaver, a freshman broadcast journalism major, played the roll of the scary clown in the haunted circus wing, which won for best decorated wing in the “scary side.”

“All the girls in the wing agreed that clowns can be scary so we wanted to decorate with a circus theme,” Weaver said. “We got all of the decorations up in about a day and it looks pretty good.”

Sofia Rios, a resident assistant and junior radio-TV-film major, was dressed accordingly as the Invisible Woman from the Fantastic Four for the superhero wing. The superhero wing won for best decorated in the “nice side” of the dormitory.

“Our wing is lots of fun and we have tons of superheroes like the Powerpuff Girls and the Teenage Mutant Ninja Turtles,” Rios said. “My girls worked hard on the decorations and the children seem to like them.”

Residents from Clark Hall worked hard this year on the haunted house in the basement.

James McCombs, a freshman premajor and the vice president for Clark Hall Council, said the haunted house is usually something Milton-Daniel Hall decorates for, but this year, Clark decided to help out.

“It is pretty scary down there so if some of the children don’t want to go through we made it optional,” McCombs said.

Nauman said this year’s Colby Halloween came together wonderfully, and all the residents worked hard to keep the TCU tradition alive for the entire campus.

“We started planning in early September, and I am glad to see so many people come out to the festivities this year,” Nauman said.