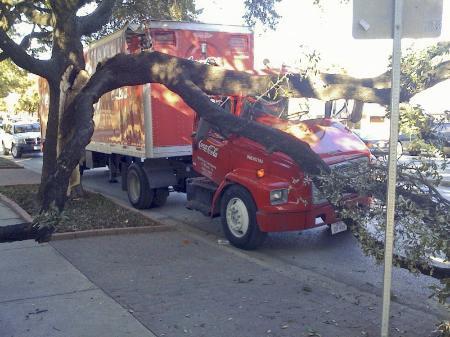 The corner of a Coca-ColaT truck clipped an overhanging branch while driving past the Bailey Building down University Drive today at about 3 p.m.

Judy Grouix, an associate professor with the College of Education, said she was standing outside of the TCU Barnes & Noble and saw the accident happen.

“The driver wasn’t driving fast,” Grouix said. “The corner of his truck just did not clear an overhanging branch.”

TCU Police were on the scene of the accident within 10 minutes, Grouix said.

Cpl. Brad Murphey of the TCU Police said there were no students passing by on the sidewalk when the accident happened, and the driver was not injured.

Murphey said he hasn’t seen anything like this happen in five years of working with the TCU Police. He said Fort Worth Police will be in charge of handling the legal aspects of the accident.

The initial impact of the truck hitting the tree caused a sizable portion of the tree to split off and fall onto University Drive.

As of 5 p.m. today, the traffic congestion down University Drive had cleared.