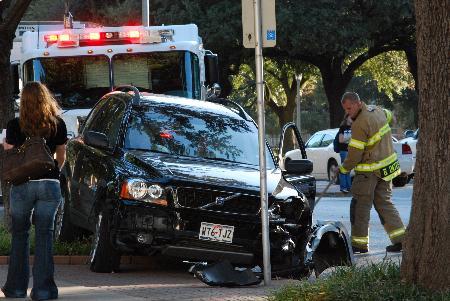 Two cars collided outside the Moudy Building Thursday, leaving a mess of glass and fenders in the middle of University Drive.

Senior communication studies major Nicole Price, who witnessed the accident, said a silver Toyota Corolla that was making a left turn onto Princeton Street collided with an oncoming black Volvo XC90 at about 5 p.m. Thursday. A Fort Worth Transportation Authority bus was stopped in the inside lane before the crosswalk of the intersection, blocking the view of both drivers, Price said. The cars hit head on as the Corolla was making the turn, sending the Volvo onto the curb and into a small tree on the sidewalk, Price said.

The Corolla’s front end was smashed, causing the car to spin back into the left turn lane, facing the opposite direction.

A Fort Worth police officer said neither driver was severely injured. The driver of the Volvo said she suffered minor scrapes and bruises.