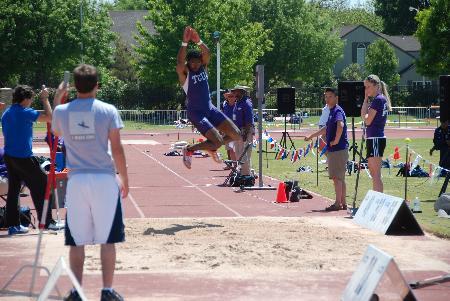 The track and field team hosted its second home meet of the season Friday and Saturday, highlighted by two record-breaking performances from TCU’s Olympic-bound runner.

Senior Virgil Hodge, who is representing St. Kitts and Nevis in the 2008 Beijing Olympics, set a personal best in the 100 meters at 11.26, not only setting a personal best but also breaking her own St. Kitts national record for the 10th-fastest time in the world.

Hodge also finished first in the 200 meters at 22.76, setting the third-fastest time in the world during the outdoor season. Both finishes beat regional qualification times.

“I didn’t get off the blocks like I wanted but I accelerated at the last to win,” Hodge said.

Senior Jonathan Jackson also left his mark during day two of the competition, breaking his own school record in the triple jump, hitting 53 feet, 7 inches and placing first overall.

He broke his 2006 record by seven inches. His current school record ranks 18th in the world.

Sophomore Neidra Covington also set a school record in the triple jump on the second day of the invitational. Covington broke the record of 42 feet, 4 inches, which had been in place since 1985, jumping 42 feet, 6 3/4 inches. The jump also stands as the 13th best in the nation.

Unattached runner and TCU junior Jessica Young returned recently from a hurt foot and placed first in the women’s 400-meter run with a time of 53.52. Young said she plans to try out for the Olympic trials in Oregon this summer.

“I’m excited about coming back to run for TCU next year,” Young said.

“I got in the race and got into a rhythm and won,” Zurko said.

In the women’s 400-meter hurdles, junior Flyin’ Frog Kishelle Paul placed first but said she wasn’t satisfied with a time of 58.74.

“I’ll take the win but the competition didn’t give me a good race and I wanted a 56 (seconds),” Paul said.

Head coach Darryl Anderson said he was pleased with the way his team performed.