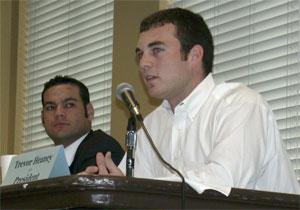 Two Student Government Association presidential hopefuls discussed their plans for the student body during a debate held Monday before the runoff election today.Trevor Heaney and Ryan Panno discussed topics such as parking, diversity and student involvement on campus. About 20 students were present for the debate, which Heaney, a junior management major, said is a sign that students have not seen lasting effects of SGA on campus.

“We need to make sure to include everyone,” he said.

Panno, a junior finance and accounting major, said that as president, he will make sure members of SGA are more than just “advertisements” around campus.

“We need to make SGA more personal,” Panno said. “Members need to go out, spread the word and get student input. Hopefully then, SGA will be more effective because the student body will see what we can do to help them.”

The presidential candidates also discussed what changes they want to make on campus.

Panno said he disagrees with Heaney’s idea of a video classroom, which would allow students to view classes they missed online. The video classroom discourages students from going to class and takes away from the classroom atmosphere, Panno said.

“I don’t know why we should spend the time, effort and resources on a program that might not be successful,” Panno said.

Panno said even though the video classroom option would only be available in upper-level classes, the program is more fitting for graduate students.

Heaney said the video classroom program would encourage change and progression at TCU through technology and force students to be mature.

“What you expect of people is what you get,” Heaney said. “If we keep saying students aren’t ready for this responsibility, then they won’t be.”

Heaney is also in favor of a class schedule which would eliminate classes on Fridays. He said he has received positive feedback from students about this idea and got the idea from professors and department heads. He did not clarify whom he had spoken with.

Panno said he disagrees because students like to have a choice about the length of classes, and having no classes on Friday would make classes longer the rest of the week.

“Some students don’t want to go to class for an hour and 20 minutes,” Panno said. “I think it will make things more difficult.”

Panno said that right now he has only one thing to say to students.

Sebastian Moleski, who mediated the debate, said he was not surprised by the low turnout at the debate but said he hopes a lot of students vote today.

“This election hasn’t been very well advertised,” Moleski, speaker of the House of Student Representatives, said. “With so many debates, there is a certain fatigue setting in with students, but they should still get involved and pick their preferred candidate.”