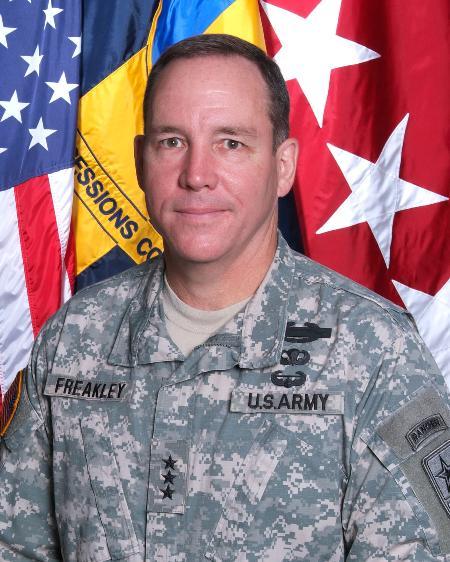 The commander who oversees all U.S. Army members has planned his first visit to the university to meet with ROTC members Monday, a university official said.

Lt. Col. John Agor, professor of military science, said Lt. Gen. Ben Freakley, commander of the U.S. Army Accessions Command will be making the rounds on campus Monday. Freakley is responsible for every person who enters the Army, including all officers and enlisted soldiers. Agor said Freakley’s responsibility involves making sure officers, soldiers and recruiters who interact with the public are reaching individuals who would benefit the Army and country.

Bruce Jasurda, chief marketing officer for the U.S. Army Accessions Command and TCU alumnus, wrote in an e-mail that Freakley is visiting universities of merit that have ROTC units on campus. He wrote Freakley would meet with university ROTC leaders and members to “observe their leadership training and operations,” as well as meet with the chancellor to thank him for the university’s “outstanding support in developing future Army leaders.”

Cadet Major Andy Chisholm, a senior political science major, said major generals normally do not visit a university unless there is something important to discuss or they feel a visit is essential.

“What it means in regards to our campus is the fact that we have a vibrant and growing and really one of top, I feel like, ROTC programs in the nation,” Chisholm said. “He’s coming to ensure that continues to happen.”

Agor said he hopes Freakley gains a fuller understanding of how supportive the local community is for the military in general.

“TCU is so completely supportive of our mission to make Army leaders,” Agor said, adding that university and student support has helped the ROTC program grow.

Agor said he hopes cadets gain a broader understanding of what is going on outside of the university from Freakley’s visit, as well as where they stand in the bigger picture.

“He’s the man who’s in charge,” Agor said. “He gives us the assets and the direction to be able to do what we do. So he’s got an awesome responsibility to be able to man the United States Army in a time of war.”