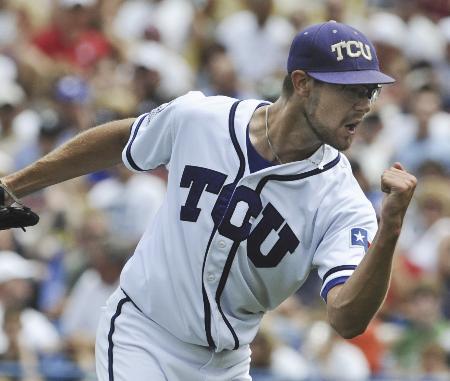 OMAHA, NE — Strictly statistically speaking, TCU (53-13) should like their chances of evening the score against no. 6 seed UCLA (50-14) Friday at 3:30 p.m. on ESPN2. Freshman Pitcher of the Year Matt Purke, who is undefeated and leads Division I Baseball with 15 wins, will be on the mound for the Frogs.

Stick Purke in the Microsoft Word database of synonyms for undefeated, clutch and reliable. He’s a right-click and scroll of the mouse away from extending what has become a memorable 2010 College World Series for TCU in Johnny Rosenblatt Stadium’s last year of service.

Purke had shut down Texas and Florida State consecutively in the NCAA postseason; he gave up one run to the Longhorns with 11 strikeouts and didn’t allow an earned run to the Seminoles in TCU’s first CWS victory.

Head TCU baseball coach Jim Schlossnagle said his team wouldn’t see pitching like they saw against Texas in the Austin Super Regional, but UCLA is the next best thing. The Bruins rank second in the nation in team ERA (2.97), compared to Texas’ nation-best 2.47 ERA.

The Bruins’ probable starter will be junior southpaw Rob Rasmussen (11-2, 2.73 ERA). Rasmussen, a Florida Marlins second-round draft pick, is ranked third in the Pac-10 in strikeouts (117).

Rasmussen has been able to finish teams off for UCLA in the postseason: Rasmussen was the starting pitcher in the Bruins’ 6-2 win against UC-Irvine; he also finished of Cal State-Fullerton in the Los Angeles Super Regional, throwing a two-hit complete game to give UCLA their third CWS berth.

“I think UCLA, no disrespect to anybody else we’ve played, they’re the best team,” said TCU head baseball coach Jim Schlossnagle. “Oklahoma and UCLA are the two best teams I think we’ve seen all together.

“Texas is right there with them with their pitching for sure. But UCLA is a very complete team.”

“(The Bruins) are a great club; they have great pitching,” said TCU All-American catcher Bryan Holaday. “They play really good defense. They hit really well. It’s going to be a really tough game going into them, but we’re really looking forward to it.

“Were right where we want to be, our backs against the wall and were throwing one of our best pitchers (in Matt Purke).”

The TCU-UCLA rematch would only be half the battle for TCU to reach the CWS Final, as well as just one win out of the five the Frogs need to be crowned champions after Monday’s loss to UCLA.

18 out of the last 20 CWS champions were 2-0 entering their respective Bracket Final. UCLA or Clemson would continue that trend in 2010 if either team were to win the NCAA Baseball Championship.

The Clemson-South Carolina game will follow the TCU-UCLA game at 8 p.m. Friday on ESPN2.

South Carolina is in the same shoes as TCU after eliminating Oklahoma 3-2 in extra innings Thursday. The Gamecocks would have to beat the Tigers twice to advance out of Bracket 2.