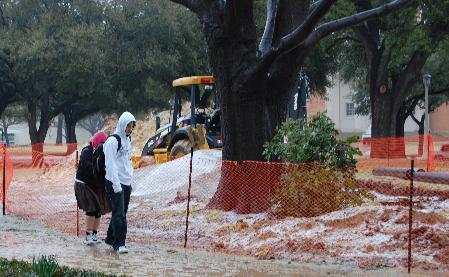 The university’s luck with adverse weather near holiday breaks is becoming a trend. There were ice storms before dead days in fall 2005, severe winds before finals in spring 2006 and the day before Spring Break, some late season wintry weather is moving through the Metroplex.

As of 2 p.m. Thursday, the campus was closed due to the weather conditions, according to a mass e-mail sent from the university.

In a follow-up e-mail from Provost Nowell Donovan, he wrote there is an expected 3 to 5 inches of snow to come during the evening.

The National Weather Service’s most recent report, sleet and snow will be the main weather through the Metroplex, while some of the northern areas such as Sherman will be receiving more snowfall. By late afternoon in Fort Worth, snow should begin falling in Tarrant County and there is a snow advisory in effect until 6 a.m. Friday.

For students traveling during Spring Break, Dallas Fort Worth International Airport is expected to have delays of up to an hour due to ice on the runways during the evening.