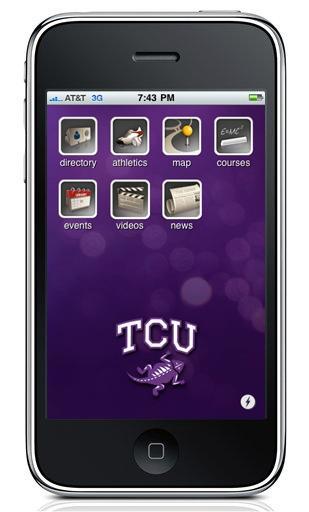 Starting this week, students will have yet another reason to browse their iPhones during class. The ever-present mobile device will feature a new application developed for TCU.

Bryan Lucas, executive director of technology resources, said that the new app named “iTCU” will be a mobile portal for students, faculty, alumni or friends of the university. The free application can be downloaded from the iTunes App Store and will be a “suite” containing many other apps, he said.

Lucas said the technology resources department and marketing department worked together to create an app that will help gauge the interest from students for more interactive programs.

He said that the iPhone is the third most used way to access the TCU Web site, making it a logical choice to launch using this platform.

“There will be a version for students without an iPhone but it definitely won’t be as sleek as the app for the iPhone,” Lucas said.

Victor Neil, director of Web site management, said from a marketing perspective it was important to have consistent branding while developing the app.

“We wanted it to be obvious to users that this is an official TCU app,” Neil said. “From the university logos to the official university colors used in the app it was important the branding was consistent.”

Lucas said that he hopes for the app to become more interactive for students.

“In the future students could possibly add funds to their Frog Bucks, track the route of the campus shuttles, and enroll for classes all on their iPhones,” Lucas said.

He said that in order for the app to grow, student feedback is crucial.

“There will be a place for students to submit comments about the app,” Lucas said. “This is real student driven and their feedback determines where we go next with this project.”