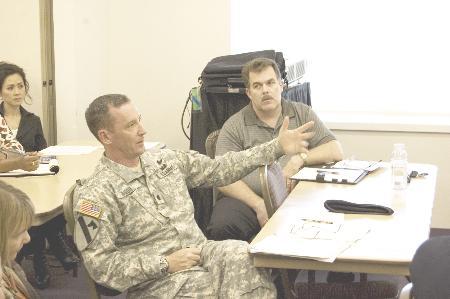 Forrest Lane, director of student organizations and facilitator of the veterans’ committee, said the purpose of the meeting was to funnel the 26 members into focus groups to address the issues facing veterans on campus, including the complexity of veteran benefits, housing requirements, how to identify veterans from the general population and training faculty and staff to better understand issues with veterans in the academia.

Compiling services offered on campus, like counseling, and comparing established programs at other universities and using them as models will be the focus of two of the groups which will be formed to gather information into a proposal, Lane said. Another group will focus on identifying veterans on campus, Lane said.

Lane said the purpose of the committee is to write a proposal to present to Don Mills, vice chancellor for student affairs, by the end of August. The proposal will tier recommendations to provide a meaningful way to implement the suggestions, Lane said.

“It is in a lot of ways a wish list that we hope can be contextualized,” Lane said.

Jonathan Roark, director of emergency preparedness and a veteran who served in the Navy for 24 years, said he would like to see an all-student veteran group formed to help the committee write the proposal since it would be directly affecting them.

Roark said he had originally wanted to form a veterans-only group because when he left the Navy, he missed the close relationships he had formed there.

“When I got out, I missed my Navy family,” Roark said. “When I got here, I asked, ‘Where are our veterans?'”

Roark said he would like to see a sponsor program formed where a veteran entering the university will have someone to guide him or her through the enrollment process, especially when taking into consideration the special requirements and benefits offered for veterans.

Chris Simcho, junior strategic communications major and a Marine for five years, said one of the issues all veterans face when making the transition between serving and entering school is the number of hours transferred.

When serving in the military, all members must take classes in basic English, math, science and classes focusing on cultures that will be encountered in the future, Simcho said. Upon entering college, universities transfer only the minimum, Simcho said.

“I had 36 hours from my military background and TCU only took four, and that was for boot camp as a P.E. credit,” Simcho said. “I understand not everything can be transferred, but some would be nice … especially if it’s for the cultural or global awareness courses.”

Lane said there is a possibility a fourth group will be created to focus on compiling financial information for veterans and to take a closer look at the Yellow Ribbon Program.

According to the GI Bill Web site, the Yellow Ribbon Program allows institutions of higher education in the United States to voluntarily enter into an agreement with Veteran Affairs to fund tuition expenses that exceed the highest public in-state undergraduate tuition rate. If a veteran attends a private institution, the program will cover up to the highest public in-state tuition rate, and the university may pay up to 50 percent of the difference, while Veteran Affairs will match the same amount.

Lane said prospective veteran students who are looking into the university will see the support system and Yellow Ribbon Program as an advantage.

“There is a lot of support for veterans on campus,” Lane said. “We’re just looking for a venue to show that.”

Austin Onyeche, an employee of the physical plant and freshman at Tarrant County College, said he is in the process of making the transition from someone who served in the Navy for four years to a prospective TCU student.

“It’s a great thing what the committee is trying to do,” Onyeche said. “It’s a testament to a community that cares.”