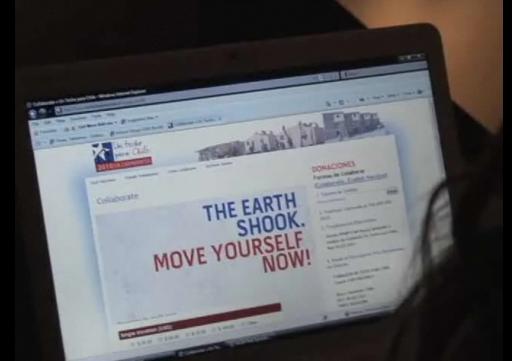 The devastating earthquake in Chile has one Chilean student in shock.

A student from Santiago, Chile woke up to a phone call that would leave in her panicked for several hours. Tatienne Thiele, a sophomore interorior design major, said her parents called Saturday, Feb. 27 to tell her about the severe earthquake that hit Chile, but before Thiele could get more information the signal cut out.

“I was freaking out,” Thiele said. “I started looking it up on the internet and seeing that it was really bad and a huge earthquake.”

Thiele said her parents found a friend whose WiFi Internet service would allow them to communciate via Skype for a few minutes at a time. During Thiele ‘s brief conversation with her parents, Thiele said he had never heard her father sound so scared.

“My dad said he kept thinking it was a nightmare,” Thiele said. “My mom was like I literally thought this was it, we are going to die.”

Thiele lives five hours away from the epicenter where the earthquake hit. The earthquake in Chile had a greater magnitude at an 8.8 than Haiti at a 7, according to the Associated Press.

Thiele’s parents told Thiele that it seemed like the earth would never stop shaking. Thiele said glass broke everywhere and her cats ended up on the roof.

“There was no severe damage to my house or my nieghborhood which is good, but I think it was more psychologically damaging.”