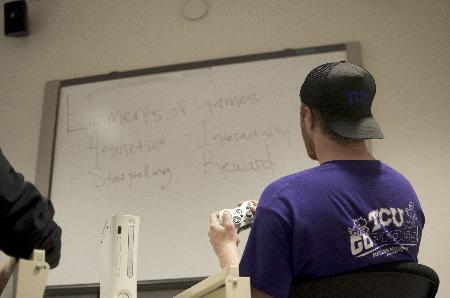 David Crouch, a senior film-TV-digital media major, might use video games next semester to earn credit toward his major.

Crouch said he planned on taking the new class called critical video game analysis, which will be available in spring 2010.

“I think mine and most people’s reactions when we first heard about a video game class was like, ‘What? Really?'” Crouch said.

He said he thought the concept of analyzing video games made sense for FTDM students, though.

“This is another form of digital media that’s just as relevant to us and future generations as the television was to our parents and the radio to our grandparents,” Crouch said. “Of course, three hours of Wii Tennis a week isn’t bad either, and us FTDM majors get to have a little fun while earning that analysis credit.”

Watts said the class would integrate multiple elements of video games. She said she thought she would teach video game history in the first part of the semester.

“Video games actually have a fairly long history but because they’re fun,” Watts said. “They’re usually not considered relevant for academic study. You could argue that video games impact your daily life much more than cinema.”

In addition to history, the class would involve critical analysis of race and gender issues in the games, Watts said. The class would also include lab time during which students would play video games like Nintendo Wii titles, “Rock Band” or “Guitar Hero” and Microsoft Xbox games.

Richard Allen, chair of FTDM, said he thought the class would provide an intellectual awareness of video games’ place in the entertainment industry. The class would be an opportunity for students to see fun games in an educational light.

Allen said Watts formulated the original idea for the class.

“When we hired her, this is the kind of class we were hoping she would teach,” Allen said. “I think everyone would like to take credit for it because it’s such a good idea.”

Watts said she looked forward to seeing students critically observe something like video games that they might not have previously observed.

“My goal as a teacher is to help students understand how things they do in their daily lives actually have larger meanings,” Watts said. “Video games are taken for granted, but they’re worthy of being studied.”

2. The average game player is 35 years old and has been playing games for 12 years.

3. Forty percent of all game players are women.

4. Thirty-seven percent of heads of households play games on a wireless device, such as a cell phone or PDA, up from 20 percent in 2002.