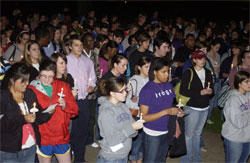 The flags hung limp at half mast behind the crowd of students who gathered in front of the Sadler Hall steps Wednesday night. Between 300 and 400 students came together in support and solidarity for the victims of the Virginia Tech massacre, said the Rev. Angela Kaufman, university minister.

On Monday morning, 32 students and faculty were gunned down in a shooting spree at Virginia Tech’s Blacksburg, Va. Campus by a gunman who later took his own life.

Students huddled in small groups, talking quietly and fidgeting with their candles. But all went silent when the bells of Robert Carr Chapel tolled 33 times for each of the lives lost.

At the podium on the steps, draped with the Virginia Tech flag and illuminated by the light of video cameras and candles, students read passages from the Bible and a speech by Martin Luther King, Jr.

“I came because I felt like we just needed prayer,” said Elspeth Allen, a senior religion major. “By gathering as a community, we’re there to show them support and love. No matter what some people do, we still have love. God is still good, and all of our prayers go out to Virginia Tech students as well as the family and friends of the shooter.”

The event was organized by University Ministries and the Student Government Association. Kaufman said students are coping with the tragedy in many ways, and they will have the opportunity to write cards with notes of encouragement, personal thoughts and prayers at a table outside The Main this week.

“I think students are seeking out places of meaning,” Kaufamn said. “For many of those, it’s places of faith. We as a community are going to find different ways to respond that reflect who we are.”

“My biggest concern is that we need to start looking out for one another as the TCU community,” said David Mitchell, a junior secondary education major. “Tonight is a good indication that TCU is capable of it. We need to put aside our differences to pick up each other when we are down and lift one another up.”

Freshman Katie Johnson’s best friend is a student at Virginia Tech who was in the building just minutes before the shooting occurred.

“I don’t even know what there is to say,” Johnson said.
While SGA members distributed candles to the group of students, faculty, staff and community members, Word of Truth Gospel Choir sang “Amazing Grace.”

“It just gets you thinking about life,” Fort Worth resident Nicole Wiggs said. “How short, how precious it is.