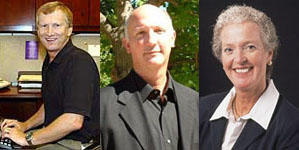 Increasing the visibility of the College of Communication is a top priority, every dean candidate for the college said, agreeing that the college has the potential to be one of the best communication schools in the nation.

The candidates were given 30 minutes to discuss their plans for the College of Communication and 30 minutes for a question-and-answer session during their visits to campus over the past week, said John Tisdale, chairman of the dean search committee and associate professor of journalism.

Tisdale said each candidate has different, distinct personalities and approaches that would work for the College of Communication.

The three remaining hopefuls are Howard Sypher, head of the communication department at Purdue University; Judy VanSlyke Turk, director of the School of Mass Communications at Virginia Commonwealth University; and David Whillock, radio-TV-film professor and associate dean to the College of Communication at TCU.

Turk said it is important to bring all three units of journalism, advertising/public relations and radio-TV-film together to achieve the goal of visibility for the college.

The best colleges of communication will be ones that integrate with other colleges and networks to raise awareness and develop strong high-quality relations in and outside the U.S., Sypher said.

All three candidates also said raising funds for the school is important so there would more technology and space with which to work.

“It is an exciting time to be at TCU to experiment and move forward with the times,” Sypher said.

The candidates said it is important to get the student-teacher ratio to the number the university wants.

Each candidate said he or she expects great things from the students and faculty who will move the university toward its goals for the College of Communication.

“No dean wants to take a walk and turn around and find that no one followed,” Sypher said. “They want everyone to move forward with them.”

Tisdale said the committee will meet Monday to discuss the pros and cons of each candidate and the provost and chancellor will work on making a decision.

“For the benefit of the candidates, I hope that the decision is made shortly after the meeting Monday,” Tisdale said.