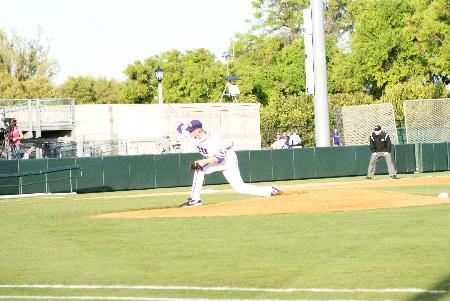 Baseball season will officially kick into high gear for the Horned Frogs this weekend when they begin a string of seven straight home games in a span of 10 days. The homestand will tie the team’s longest of the season. The team has another extended stay in late April.

A 14-6 record to start the season, not including last night’s contest against Baylor, had the Horned Frogs ranked 16th in Baseball America’s Top 25 rankings.


The series against SDSU (16-8), winners of nine of their last 11 games, will be the Horned Frogs’ second bout against another Mountain West Conference team this season. The Horned Frogs took two of three from Utah last weekend in Salt Lake City and currently sit in fourth place in the conference.

Last season, the Horned Frogs shredded SDSU for 30 runs during a three-game series in San Diego, but only managed to walk away with two wins.

A series against conference-leading New Mexico next weekend will conclude the Horned Frogs’ lengthy stay in Fort Worth.

San Diego State right-handed pitcher Stephen Strasburg, a potential No. 1 overall pick in June’s MLB Draft, is expected to take the mound for the Aztecs tonight.

The 6-foot-4-inch, 220 pound junior, who frequently eclipses 100 mph on the radar gun, has been almost unstoppable this season. In five starts, Strasburg is 4-0 with a 1.57 ERA.