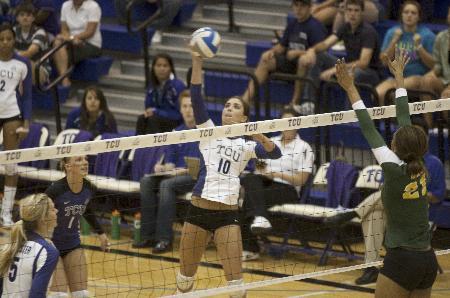 Coming off of a three game winning-streak, the women’s volleyball team will play the Lobos of the University of New Mexico on Wednesday in Albuquerque.

Head coach Prentice Lewis said that although the team played well in Ohio and won all three tournament games, it faces the same obstacle in Wednesday’s game: not having home court advantage. And the Lobos, she said, typically have a lot of supporters at their games.

“It’s always great to have good momentum going into matches, but each match is completely different because of the personnel on the other side of the net,” Lewis said.

Wednesday’s game will be the Horned Frogs’ first conference game of the season.

“They’re very excited about conference play,” Lewis said of the team. “TCU has not beat New Mexico on their home court yet, and I know that’s something that’s driving our athletes.”

The Horned Frogs have won eight of the 11 games they have played this season, and the Lobos have won seven of their eight games this season.

Lewis said that although it is a conference game, the Horned Frogs have to approach the game against New Mexico the same way they would approach any other game.

“We need to come out and play consistent,” Lewis said. “That’s what we finished with on our Saturday night match.”

She said it will take consistent passing, a good defense and a strong offense to beat New Mexico.

After Wednesday’s game in Albuquerque, the Horned Frogs will come back to campus to play at home against the University of Tulsa at 6:30 p.m. Friday.

Where: At New Mexico