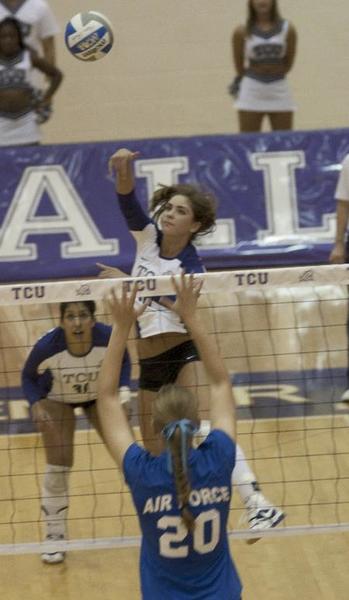 If there is anything that will keep the volleyball team in the upper echelon of the Mountain West Conference, it’s momentum.

With the win, TCU improved to 15-6 and held its third place spot in the MWC with a 5-2 record.

The Horned Frogs will look to continue their push for a regular season championship Thursday night against the UNLV Rebels.

The match will cap off the first half of the conference schedule and will also be the team’s first broadcast on the Mountain West Sports Network this season.

UNLV enters the match with a 4-10 record and 2-4 campaign in conference play. The Rebels are coming off a 3-1 win over the Seattle Redhawks last Saturday.

TCU is 2-8 all-time against the Rebels, with the last win coming in 2008 in Fort Worth.

Although home games have been a rarity for the Horned Frogs, TCU has taken advantage with a 5-2 record. TCU averaged 13.0 kills per set and hitting a .223 percentage.

The Horned Frogs continue to display, statistically, the best defense in the league, holding opponents to a .160 hitting percentage. TCU also leads the conference by 15.67 digs per set and is third in blocks with 2.47.

When: 7 p.m., also televised on the Mtn. Network