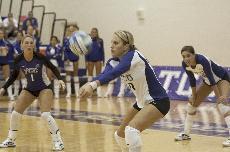 The women’s volleyball team will be looking to end its two-game losing streak this weekend.

However, instead of playing in the friendly confines of the University Recreation Center, the Lady Frogs will be traveling over 1,700 miles to Storrs, Conn. to take on New Hampshire in game one of the UConn Toyota Classic.

Other opponents the Horned Frogs will face are the University of Connecticut and Long Island University.

On Friday, TCU takes on New Hampshire out of the America East Conference. The Lady Wildcats return all but one player from last year’s 7-21 season, including two America East All-Rookie players and two members who were tabbed second team all-conference.

UNH just capped off a 0-3 finish at the Big Orange Classic in Syracuse, N.Y. Taylor Dressing led the offense with 2.38 kills per set. Sarah Heldman topped all defensive categories with 4.4 digs per set.

The Lady Frogs have never played the Blackbirds, who are also off to a 0-3 start. Long Island went 0-2 in the Madison Bingaman Memorial Tournament in Baltimore, Md. On Tuesday, the Blackbirds were swept at home by Villanova (9-25, 20-25, 15-25).

TCU, which had lost to Baylor on each of its previous five occasions, won two of the first three sets of the game, and it looked as though they were well on its way to upsetting the Bears.

But Baylor fought back.

Storming to a 7-0 lead in the fourth set, the Bears never looked back and cruised to a 25-9 win.

With the game tied at ten, Baylor used a 4-1 rally to reach match point. A service ace by Lauren Otto got TCU to within one at 13-14, but Baylor’s Ashlie Christenson held the Lady Frogs at bay with a kill.

Following the UConn tournament, the Horned Frogs will travel to SMU.

TCU opponents at a glance.