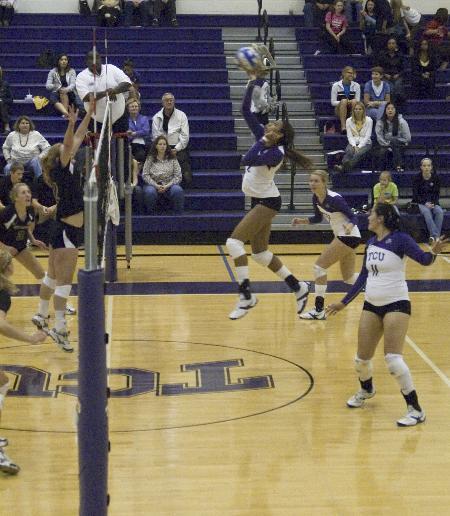 The volleyball team beat Wyoming on Thursday night, bouncing back from consecutive losses against BYU and Utah.

“We all had a common goal to come out, work hard and finish the game on top,” Edwards said.

“We had to make sure that we were doing everything that we could to keep the ball in play on our side,” Edwards said.

Edwards said the team had a slow start in the beginning, but the team came together in the end, she said.

Senior setter Nirelle Hampton said the win was a confidence booster for the team.

“We just went in and played fairly consistent through the whole thing,” Hampton said. “We had a few times where we just took a couple breaks, but for the most part, it was a really solid win.”

Hampton said the team pulled through by passing well and trying to keep its consistency.

“Just making sure we kept our serves in was huge,” Hampton said. “That was really frustrating at first, but once we started getting our rhythm, we were able to pull out of it.”

Head coach Prentice Lewis said the team played like it needed to against Wyoming.

“We just played like a team, and that’s what we needed to do,” Lewis said. “We weren’t six individuals out there, we were six teammates out there. So everybody played for each other.”

Lewis said the team would be preparing no different for its match against Colorado State on Saturday than every time it practices.

“We used tonight to prepare us for Saturday’s match,” Lewis said.

The game was followed by a ceremony for the team’s two senior players: Hampton and Devon Kirk.

“It’s been a blast playing here, and I absolutely loved it, loved my time here, and I’m going to miss it,” Hampton said.