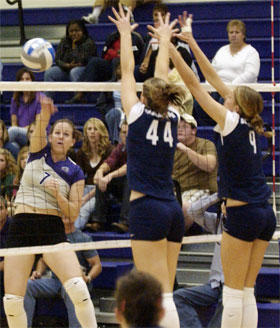 The TCU volleyball team fell to No. 13 Brigham Young in four games Friday and to Utah in three games Saturday in the University Recreation Center.After losing the first two games, TCU rebounded to take the third game before falling to BYU. Freshman setter Nirelle Hampton posted her third double-double of the season against the Cougars.

The losses dropped TCU to 3-7 in the Mountain West Conference and 15-11 overall.

“I thought that we prepared well for both BYU and Utah,” said Jason Tanaka, associate head coach. “We weren’t able to pass the ball very well against both teams, but our setter, Nirelle Hampton, played very well in both matches.”

Hampton added new shots to her game, which helped the team, Tanaka said.

“We are always looking for a player to evolve to a new level, and Nirelle was able to do that this weekend,” Tanaka said.

TCU will play at New Mexico on Friday.

“New Mexico has had some big wins over Utah and CSU,” Tanaka said. “I know that they will be ready for us.”