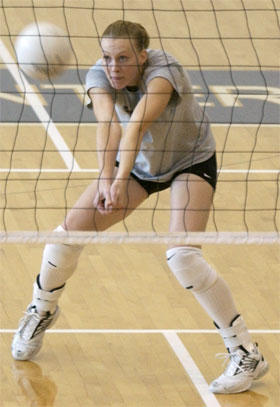 The volleyball team will head to Denver this weekend to compete in its second invitational tournament against schools from around the nation.TCU competed in a tournament last weekend at George Mason, where it finished with a 3-1 record. Head volleyball coach Prentice Lewis became TCU’s all-time winningest coach with a victory over Seton Hall in the tournament.

“There are a lot of hopeful teams we will be playing in the upcoming tournament, and I am glad to be going,” Lewis said.

During the tournament last weekend, Vaughn chalked up nine kills in one match to help the team win the game.

“We have a team with a lot of potential,” Vaughn said.

Lewis said she is optimistic about the way this group of players is coming together.

“I think we are really starting to get that chemistry,” Vaughn said. “That’s good because teams sometimes don’t get to that point until the last couple of games.”

Lewis said the season is looking bright because everyone on the team is healthy, and there are no major injuries holding players back.

Many sophomore and freshman players are becoming key elements in the team’s strategy. Sophomore middle blocker LeMeita Smith, sophomore setter Loren Barry and freshman outside hitter Devon Kirk are all underclassmen who contributed to the team’s success in the last tournament.

“Having such a young team has been working out great for us this year,” Vaughn said. “They all are willing to work hard, and I can see this being a good situation this year and on down the road.”

Kirk said many of the underclassmen have really taken to Lewis’ strategies and said she enjoys playing for a coach with such an intensity and desire for the sport.

“The beginning of the season is really going well, better than I expected,” Kirk said, “and we are all improving every day.